The Mayor of Dudley is backing a pantomime put on by a borough charity in a public vote to win a major award.

Aladdin, which was produced by Mary Stevens Hospice, has made the final shortlist for Best West Midlands Pantomime in the What’s On Readers Awards 2020. 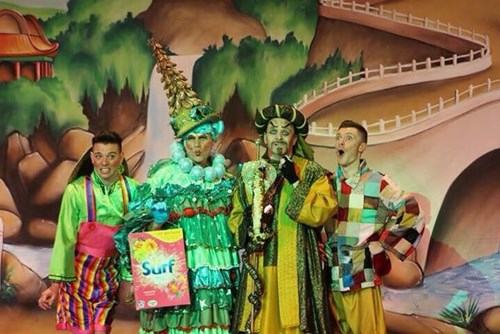 In addition children’s entertainer Wally Wombat, who starred in it, is up for Best Panto Dame.

The Mayor of Dudley, Councillor David Stanley, was wowed by the production after being invited to see it as a special guest at Stourbridge Town Hall at the end of last year.

He is now urging people to follow his lead by casting a vote for Aladdin to win the prize.

I’m more than happy to cast my vote for Mary Stevens Hospice’s fabulous pantomime Aladdin and I hope others will join me.

I was really impressed by the standard of acting and set design when I went to see it. I said it at the time and I stand by it, it wouldn’t have looked out of place in the West End.

Winning this award would be a great testament to all the hard work of everyone involved.

People can vote for the pantomime at www.whatsonlive.co.uk/readers-awards-2020/. It is category number eight (with Wally Wombat category nine) and people can just vote as many or as little categories as they wish.