Mayor calls in for bargains

The Mayor of Dudley officially opened a new branch of B&M this week (21 August).

He called in at store in Halesowen’s Cornbow Centre, one of three new retailers to take up residency in the popular shopping centre following a £1.2m investment by the centre’s owners.

The store has brought 40 new jobs to the borough with 35 members of staff turning out to meet the Mayor. He met manager Chris Summers, store colleagues and was given a tour of the store. He also greeted the first 20 customers to enter the store. 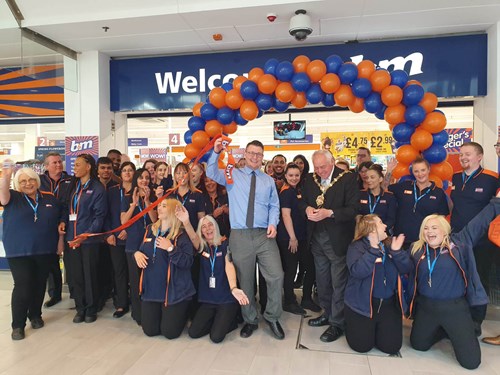 It was an absolute delight to meet the manager, staff and customers and I’m really glad to welcome B&M to Halesowen.

"It’s vital that we continue to encourage new businesses to come to the borough, we’ve a lot to offer and it’s great to see the Cornbow Centre busier than ever"

The new store has been really busy since it opened and feedback from customers has been great so far.

"A big thank you to Phase Trust who helped us open the store today, we hope that our donation can help them continue the outstanding work they do for the local community.’’

B&M is a national discount retailer with over 640 stores across the UK, they currently aim to open 50 stores a year. This is the fourth B&M store to open in the borough, alongside stores in Brierley Hill, Merry Hill and Dudley.

The B&M store is located on the ground floor, at the head of the Cornbow Mall and replaces New Look and Roman Originals as well as two vacant units. It follows Heron Foods and Costa Coffee in relocating to the centre this year.