The Mayor of Dudley has extended his congratulations to volunteers and community groups involved in the successful Halesowen in Bloom campaign.

Made up of over 100 volunteers, the group has taken Gold in the urban community category award for the Heart of England. It will now go up against four other towns from across the country in the national awards on October 19. 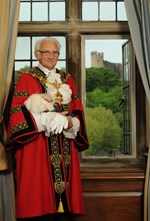 The national in Bloom campaign is run in association with the Royal Horticultural society (RHS) to celebrate the amazing horticulture work carried out in communities by volunteers, groups and organisations. Judges from RHS praised Halesowen for having the finest quality flowers, hardworking volunteers and a diverse range of greenery.

I am delighted and not at all surprised to hear that Halesowen in Bloom has made it to the national final, it is a beautiful town and a joy to see it in bloom.

I want to take this chance to personally thank the many volunteers and sponsors who have helped to make this a possibility and I wish them all the very best on October 19.

We are overjoyed to see everyone’s hard work pay off and cannot wait to see the outcome of the national final.

Halesowen in Bloom has brought people and businesses together to make the very best of our beautiful town and we are proud of all that Halesowen continues to achieve.

This year’s Halesowen in Bloom is supported once again by Sandvik and the Halesowen BID company.