The Mayor of Dudley got a sneak peek at one of the chilling movies at this year’s horror film festival in Stourbridge.

Filmmakers from around the world have been submitting their horror films ahead of the festival at the Bonded Warehouse, which is organised by Weeping Bank Productions. 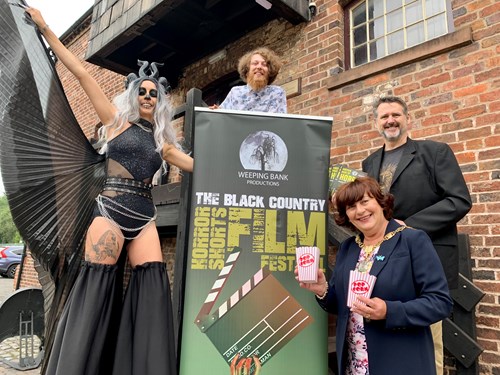 Mayor, Councillor Anne Millward popped into see the organisers this week and got to a preview of one of this year’s short films.

I love a good horror movie and it was great to watch a preview of one of the films which will be shown at the festival. The audience are in for an absolute treat, as well as a few scares!

It’s great to see an event like this on offer here in the borough.

Filmmakers compete for trophies for the best film with entries from around the world. The films last anywhere between 4 and 10 minutes

Titles on the bill already include Spyglass, Save, Number 3, The Barber and many more.

The festival runs for one night from 7.30pm and tickets are now on sale at £10 each.

This year we got some great international entries which made it really difficult to judge. But the real winners are the audience who get to watch them and we even invite them to vote for their own particular favourite on the night.

I’m delighted to have welcomed the Mayor to give her a flavour of what is on offer at the festival. “It’s a great night out for film fans to see the talents of independent filmmakers.