The Mayor of Dudley has today (October 1) laid flowers to mark the birthday of one of Dudley’s most famous sporting sons.

On what would have been Duncan Edwards’ 83rd birthday, the Mayor and guests laid flowers at the statue, which honours the sportsman in Dudley town centre. 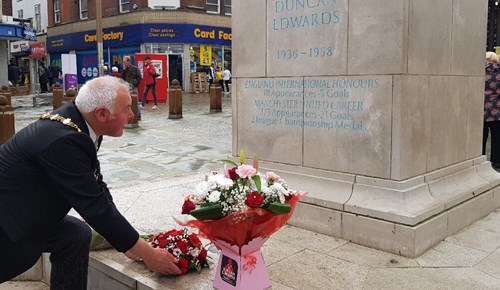 Earlier in the day, the Mayor was joined in the Council House by Rose Cook Monk of the Duncan Edwards Foundation as she officially launched her new play, ‘Keeping the Dream Alive’.

The play portrays the life and times of Duncan from early childhood through to reaching the heights of his footballing career and the Munich Air Disaster, which tragically cost him his life.

Rose announced that star of TV and film Bernard Hill and lifelong Manchester United fan, will be in the play, which is set to be debuted at Brierley Hill Civic Hall in May next year.

On what would have been Duncan Edwards’ 83rd birthday, it seems only fitting that we honour the special occasion.

It was also a great pleasure to welcome Rose and her team behind the new play to the Mayor’s parlour to find out more about the upcoming play, which is the first stage adaptation of Duncan’s life.

I wish the foundation every success with the play when it opens next year.

Although I never met Duncan I have been privileged to meet many people who did and talked so openly about the kind of person and footballer he was.

In writing this play, I want to keep his dreams and memories alive for today’s, and future, generations. Thank you to everyone who has shown their support for the play and the Duncan Edwards Foundation.

The play will be performed at venues in Manchester, Munich, Malta, London and Northern Ireland. Find out more about the play and the Duncan Edwards Foundation at www.duncanedwardsfoundation.co.uk