The Mayor of Dudley today laid a wreath at the Clock Tower in Dudley ahead of this Sunday’s Remembrance service and parade.

A wreath would traditionally be laid at the World War One memorial on Armistice but as the anniversary falls on Remembrance Sunday this year, 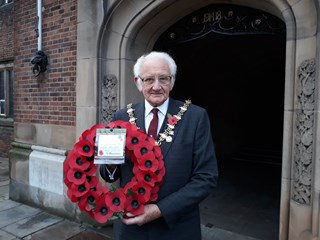 the Mayor has laid a wreath in advance to remember all those who lost their lives in the Great War.

The memorial on Priory Street will now be open every day this week from 9am to 5pm for people to place their own memorials.

Although Armistice falls on Remembrance this year, it’s important we uphold our tradition of placing a wreath at the Clock Tower to honour those from our borough who fought and lost their lives in the First World War 100 years ago.

Everyone is welcome to join in this tradition and add their own memorials throughout the week.

As Remembrance and the 100th anniversary of the end of World War One approaches I would encourage people to join us at our service on Sunday as we pay our respects and remember the fallen.

We will also take the opportunity to be thankful for the contributions of others including our veterans, the local men and women who are serving their country today either as regulars or reservists and the young people of the borough who will be there on Sunday representing organisations including the Army Cadet Force and Air Cadets.”

It will take place this Sunday (November 11) at the cenotaph in Ednam Road, Dudley from 10.40am, with the two-minute silence at 11am.

For information about life in Dudley during World War One go to www.dudley.gov.uk. Search Dudley Remembers.