The Mayor of Dudley visited a borough school to back a teacher’s bid to defend her European boxing crown this weekend.

Kirstie “Bavvo” Bavington teaches PE at Beacon Hill Academy in Sedgley by day – but it is as a professional boxer by night where she is really catching the eye. 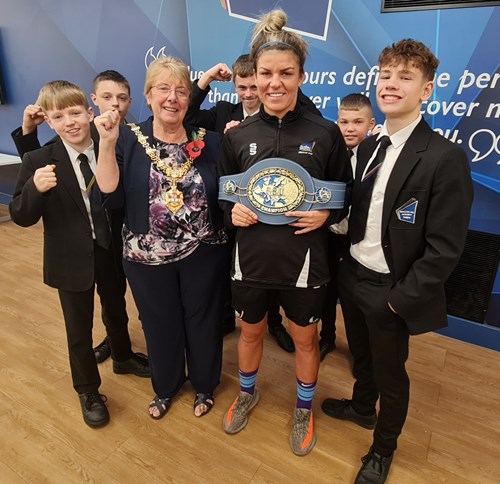 The 30-year-old has won six and drawn two of her 10 fights since turning professional in 2018.

And she has been given special leave from school this week to prepare for the first defence of her EBU European welterweight crown.

“Bavvo” is topping the bill against unbeaten German Naomi Mannes in Rotherham on Saturday night.

The Mayor of Dudley, Councillor Sue Greenaway, visited Beacon Hill Academy to meet Kirstie and back her bid for stardom.

Kirstie’s first love was football, breaking into Brierley Hill Bullets boys team at the age of five before going on to play for the likes of Wolves, West Bromwich Albion, Birmingham City, Coventry City, Crystal Palace and AFC Wimbledon.

But she has now hung up her boots for good to focus on the boxing.

All my life I have played sport and I want to inspire others to participate in some way, not only through teaching PE but also through my professional boxing career.

I started boxing to improve my fitness to begin with for football, but then it became an addiction.

It was an absolute dream of mine to become a champion so I was over the moon to win the European crown, and no-one is going to take it off me without a hell of a fight!

All of the staff and students at school have been amazingly supportive, and it was great the Mayor took time out of her busy schedule to pop in and say hello. It was a gesture that was really appreciated.

I want to inspire women all over the world, to show that anything is possible if you want it and work hard enough.

Training camp has gone really well and I can’t wait to get in the ring and show what I can do on Saturday night.

It was fantastic to meet Kirstie.

She is a fantastic role model, both for her students at Beacon Hill and for women generally across the world.

It’s great to see someone chasing their dreams and I wish her all the luck in the world on Saturday night.

The fight will be streamed live on Fightzone TV. To sign up for a free trial, go to www.fightzone.uk/signup.