Attending were representatives from UK based Global Geoparks, along with those from areas aspiring to achieve the status, who are in Dudley for a meeting of the UK UNESCO Global Geoparks Committee.

This is the first time the committee has met in the Black Country since the area was formally designated and granted UNESCO status in July 2020 and became the eighth UK Global Geopark.

During the evening, delegates experienced a traditional guided trip into the underground limestone mines and the famous Singing Cavern where they were able to learn more about the Black Country’s mining heritage and geology of the mines. 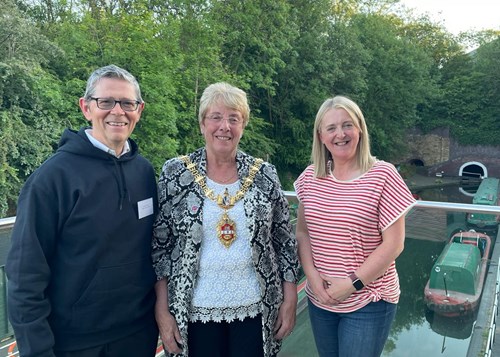 They will also visit other Geosites, including Sandwell Valley Country Park, Barr Beacon and West Park as well as meeting formally to discuss progression of the UK Geoparks in line with UNESCO policy, share good practice and ideas for collaborative working.

I was delighted to be able to welcome the delegates to Dudley as part of their visit to the Black Country Global Geopark.

Many of the geopark’s geosites fall within Dudley borough and it was wonderful to be able to showcase the famous Singing Cavern and the link between this area’s geological and industrial heritage.

Thanks to Dudley Canal and Tunnel Trust for putting on this event and providing a warm welcome to everyone.

When we achieved UNESCO status back in 2020, it put the Black Country on the international map and formally recognised the global significance of the geology found in the region.

The status confirmed what we already know. This is a special and unique place with a fantastic story to tell about its geological, industrial and cultural evolution.

The geopark status brings key partners together to continue building on the area’s story and conserve and celebrate its many riches for and future generations.

We are proud to share our story over the next few days with our Geopark family from across the UK.

It was in the summer of 2020, more than ten years after the project was first conceived, that the Executive Board of UNESCO confirmed the Black Country had been awarded UNESCO Global Geopark status.

This was in recognition of the region’s internationally important geology, its cultural heritage and the active partnerships committed to conserving, managing and promoting it.  More than 40 sites across the Black Country make up the geopark.