The Mayor of Dudley has officially opened a tribute to one of Dudley’s finest sporting heroes in a Dudley borough hotel on the 61st anniversary of the Munich Air Disaster.

As part of a series of visits to members of the Mayoral Business Club, the Mayor today (February 6) paid a visit to the Copthorne in Brierley Hill.

During his trip to the hotel, which boasts four stars and last year celebrated its 25th anniversary, the borough’s first citizen was asked to officially open a new function room, which has been named in honour of footballing legend, Duncan Edwards. 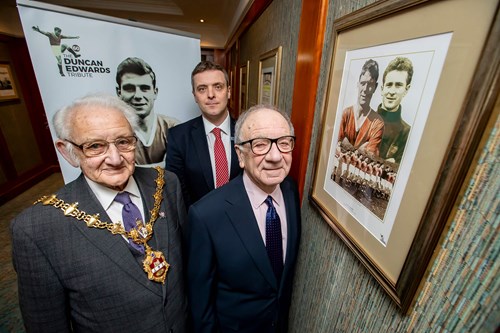 From left to right: The Mayor of Dudley, Stuart Fleming and Jim Cadman

The room will be used to host various events including the now annual Duncan Edwards tribute dinner and has been decorated with a wide range of photographs and memorabilia taken from a book recently published by Jim Cadman and Ian McCartney.

Duncan’s life was tragically cut short in 1958, aged just 21, when he died as the result of the injuries suffered during the Munich air disaster.

Thanks to the team for welcoming me to the Copthorne today, a hotel with fantastic facilities. I’m pleased the hotel has signed up as a member of the Mayoral business club and grateful for their support.

The new Duncan Edwards room is a poignant tribute to the talent of one of our most cherished sporting heroes and it was an honour to officially open it today, on the anniversary of the air disaster.

I look forward to returning to the hotel in a couple of months, when I’ll be hosting the annual civic awards and Mayor’s charity ball.”

Thank you to the Mayor for taking the time to visit the Copthorne and officially open our new function room in honour of Duncan.

We always pride ourselves on offering the best hospitality and experience to all our guests and hopefully that was clear to see today.

Moving forward, we’re really excited to be part of the Mayoral Business Club and to have the opportunity to meet with like-minded organisations who want to see Dudley borough thrive.”

Our objective is to preserve the sporting heritage created by Duncan and make the next generation of the Black Country aware of what a wonderful guiding force he was.”

The Mayoral Business Club is made up of businesses with a keen interest in working with the council and other agencies to make the borough an attractive place to work and live. Members of the club benefit from a range of networking events and VIP experiences and can sponsor many of the borough’s popular events such as the Civic Awards, Armed Forces Day and Himley Bonfire.

To find out more about the business club or to become a member, visit https://www.mayorofdudley.org.uk/mayoral-business-club

The Mayor’s charity ball will be held on Friday April 5. Tickets cost £38 and include a three course meal, live entertainment, music, dancing, games, a charity auction, raffle and more. Find out more or book tickets at www.mayorofdudley.org.uk/civicawards