A popular horror film festival is returning to Stourbridge and the Mayor of Dudley got a sneak preview of the terrifying titles.

Filmmakers from around the world have been submitting their horror films ahead of the festival at the Ruskin Glass Centre, Wollaston Road, which is organised by Weeping Bank Productions. 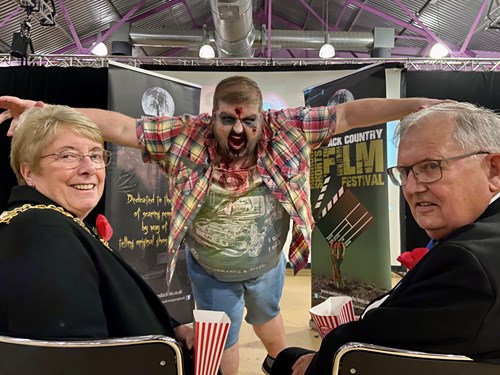 It’s great to see events like this for local people. I am sure there will be plenty of people there on the night celebrating the work of talented filmmakers.

Filmmakers compete for trophies for the best film with entries from around the world. The films last anywhere between 4 and 10 minutes

The festival runs for one night from 7-10pm and tickets are now on sale at £10 each (plus a booking fee).

This was incredibly popular last year so we had to bring it back to Stourbridge. The quality and inventiveness of the filmmakers is amazing. We’ve got raked seating this year as well following helpful feedback from audiences last time so people will have a fantastic view in a great new venue. Last year sold out so people need to get their tickets quickly.