Mayor receives message from the Queen

The Mayor of Dudley has expressed her delight in receiving a message of thanks and warmest wishes from Her Majesty the Queen.

Councillor Anne Millward, The Mayor of Dudley recently penned a letter to the Queen outlining her charities for the year ahead, a choice inspired by the work of the Royal family.

In her letter, the Mayor talked about her admiration for the Duke of Edinburgh in his efforts to support young people and how the Duke and Duchess of Cambridge have inspired her with all their work to raise awareness for mental health.

The Mayor’s charities are the Duke of Edinburgh award and Dudley Mind.

In a letter received from the Queen’s private secretary from Windsor Castle, the Queen offered her thanks to the Mayor for taking the time to write and sent her warmest good wishes. 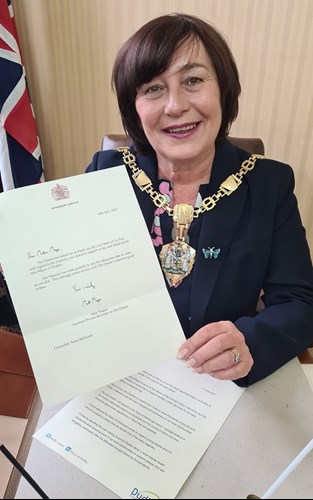 I’m delighted and honoured the Queen has taken the time to read my letter and send a response.

I have long admired the work of the Royal family and they have truly inspired by charities of choice for my Mayoral year.

I will pledge to do all I can to raise a significant sum of money to support the amazing work they do. 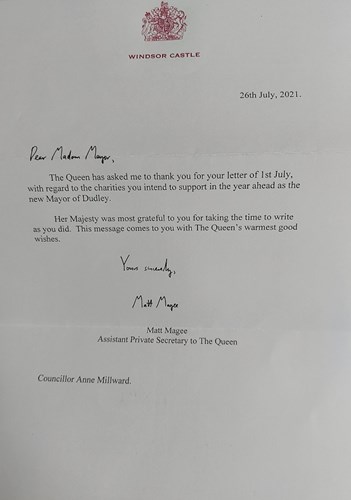 For more information about the Mayor of Dudley go to https://www.mayorofdudley.org.uk/welcome