Unsung heroes from the world of sport, business, environment, arts, community and education were celebrated at a charity ball with the Mayor of Dudley – after the original event was delayed by the pandemic.

The evening, sponsored by SF Harrison, not only raising thousands of pounds for charity but was also an opportunity to celebrate the winners of the annual Mayor’s civic awards. 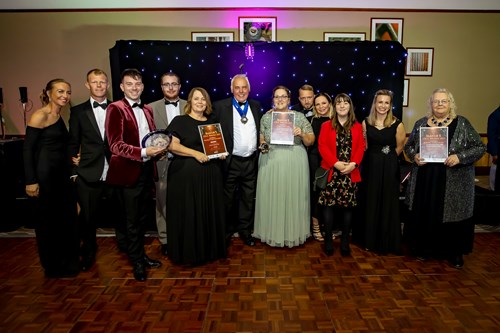 The awards, which were due to take place in April last year, had been postponed from Councillor Stanley’s mayoral year because of the coronavirus pandemic.

But the winners finally got their specially created glassware at the ceremony at the Copthorne Hotel in Brierley Hill, last night (Fri).

The awards were split into seven categories and were all sponsored by local companies.

The winner of the William Shenstone award for environment, sponsored by Jewson, went to Chairman of the Friends of Alder Coppice, Simon Biggs who has helped develop new paths through the woods, secured funding for tools for volunteers to keep the woods tidy.

Diane and Susan Baker won the Thomas Attwood Award for Education, sponsored by Merry Hill. The twins have worked with the learning disability team at Russells Hall Hospital, teaching student nurses how to both support and provide treatment to people with a learning disability.

Runner-up was Rachael Harris, a therapeutic teacher at Dudley Lighthouse Links, a service for looked after children and care leavers.

The Duncan Edwards Award for Sport, sponsored by Excel 2000 Windows, went to Stourbridge District Youth Football League which has been running for more than 40 years in the borough and beyond, providing organised sport for more than 200 teams and over 2,000 young girls and boys.

Gornal’s Eddie Daniels, who dedicated his life to teaching martial arts before he sadly died last year, was runner up. His wife, Solfrid, and son, Audun, collected the award on his behalf.

Brierley Hill Market Traders who have been credited with bringing a feel good atmosphere back to a long-running local market were the winners of the Mike Holder Award for Business, sponsored by Midshire Business Solutions. Steven Bridgewater, from the market, picked up the trophy on behalf of all traders.

Picking up the runner-up prize was Roger Bannister, who has run engineering firm Pressvess in Kingswinford, for more than 40 years.

The trophy for the winner of Cedric Hardwicke Award for Arts, sponsored by Copthorne Hotel, went to Hurst Hill Performers and Pantomime Players. The group has been running for more than 40 years and has members of all ages, with the youngest being just four performing alongside pensioners. They produce pantomimes and youth productions, raising money for the local church.

Dudley Dynamics Rock and Pop Choir, walked away with the runner-up prize as one of the largest community choirs in the West Midlands and now has around 150 members.

Black Country Wellbeing Centre was the winner of the of the Frank Foley Award for Community Spirit, sponsored by Lapal House. The centre was started by Wade Cooper who turned his life around after being released from prison and wanted to give something back to the community.

The runner-up was Eileen Fielding who has worked on Operation Santa for the past 20 years, enabling children in need in the borough receive a gift on Christmas morning.

The final award was the Mayor of Dudley’s award which was chosen by the Mayor and Councillor Stanley, personally. The award went to Mary Stevens Hospice Pantomime Company. The group was formed in 2017 to raise funds to go directly towards funding end of life patient care at the hospice. To date the group has raised £45,000.

Runner-up awards went to Dudley Mind’s Growing in the Park project and All Stars Youth Club.

This was a long over-due opportunity to celebrate the unsung heroes in the borough. They do incredible work and it is my pleasure to be able to shout about their work here. I was really pleased to meet them on the night and find out more about what they do.

The money raised from the evening will go to Councillor Stanley’s charities, which he chose when he was Mayor. They are Black Country Food Bank, St John Ambulance and Victim Support.

I am really grateful to everyone who came on the night to raise money for these charities. They rely heavily on public donations and I am really proud to have been able to use my time as Mayor to champion their work.