Mayor stops by at new nursery

The Mayor of Dudley has this week paid a visit to some of the children in a newly built, state-of-the-art nursery.

Councillor David Stanley along with his consort, Councillor Anne Millward, visited Brockmoor Primary School, which has recently had a brand new nursery built next to the school to provide pre-school education to dozens of children in the local area.

The Mayor admired the amazing new facility, with key features including bi-fold doors which help connect the indoor and outdoor space and accessible equipment, suitable for all children.

The new nursery is now able to accommodate 39 children in both its morning and afternoon sessions as well as support six children in the afternoons who have moderate learning difficulties. 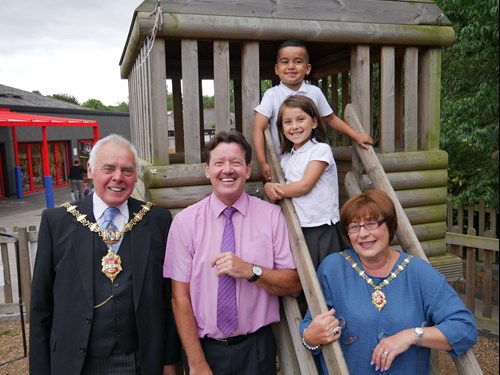 Along with the brand new nursery, the old nursery unit has also undergone a makeover and now offers 20 places to children with special educational needs. A key addition to this space is a new sensory room.

Dudley Council’s corporate landlord services managed the build process, which was completed in two phases. The first being to refurbish the old nursery and the second concentrated on the new build.

It’s been a pleasure to meet the staff and children in the nursery today and see the wonderful facilities and fantastic environment on offer.

It’s clear to see that the children are very happy and are settling in well to their new setting.

Congratulations and thanks to all involved who got the nursery to this stage.

It has been an honour for the staff and children to welcome the Mayor of Dudley to the nursery to showcase the amazing work that has been carried out to improve our environment for the children.

It was also nice for the Mayor to meet and thank Brad Jones, our inspirational headteacher and advocate for inclusive education, who leaves our school at the end of term.