Mayor to pull on walking boots and raise cash for charity

The Mayor of Dudley is to walk the Dudley Trail next week in a bid to raise cash for his chosen charities.

Councillor David Stanley will be joined by former mayors, Councillor Mohammed Hanif and Councillor Steve Waltho, on the 13-mile scenic route through the borough. 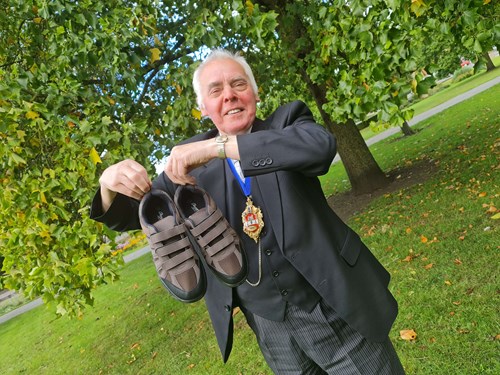 Dudley’s first citizen had been due to do the Dudley Trail in association with The Lee, Shaw Partnership on September 13 with thousands of other borough residents. But council bosses took the difficult decision to cancel the event this year following new guidance issued by the government to tackle the coronavirus pandemic.

The mayor has decided to still do the hike in his own time – and will be putting on his walking boots on October 7. He is appealing for donations for his three chosen charities. They are Black Country Foodbank, St John Ambulance and Victim Support, Dudley.

I had planned to do the ruby walk on what would have been the 40th anniversary of the Dudley Trail, so I was disappointed we had to cancel it. It was the correct decision of course, as safety has to come first.

I had hoped to raise a good sum for my chosen charities by doing it, so I’m planning to go ahead and do it in a small, safe, socially-distanced group next week.

I am appealing for sponsorship from the good people of the borough. We have around 360,000 residents – if just 1,000 of those donated 40p each we would raise £400. Any contributions to these three very worthy charities will be most gratefully received.