The Mayor of Dudley gave her civic seal of approval for a poignant display of poppies to commemorate the heroes of the armed forces.

The 720 poppies have been handmade and added to trees in Coronation Gardens.

The number is significant as it is the exact number of soldiers who are included on the war memorial at the Clock Tower in Priory Street. 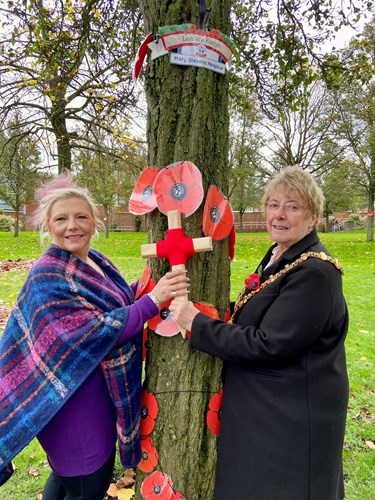 The Mayor had a special tour of the installation which has been created by volunteers at Dudley Remembrance Group.

It is part of a number of activities to honour armed forces personnel past and present.

Dudley Council has organised a special parade and service on Sunday November 13.

The council will also be holding an Armistice Day event in Priory Street on November 11 from 10.55am. It takes place at the Clock Tower and will be led by the Mayor.

The latest poppy display complements the one unveiled at Dudley Castle last month.

This is a lovely display which has been created and a very timely reminder of all of the sacrifices the men and women of the armed forces have made for us throughout history. The volunteers have done an incredible job and this is a beautiful build up to Remembrance Sunday this weekend.

We have a dedicated team of volunteers who are proud to be involved in this project. We should all take the time to remember those who sacrifice so much for this borough and hopefully these poppies will help with that.

People will be gathering at the cenotaph in Ednam Road on November 13 for Dudley Council’s Remembrance Sunday parade and service.

It includes a parade of service veterans from Top Church to the war memorial in Ednam Road from 10.15am.

There will be a service led by Reverend James Treasure at the memorial from 10.30am which will see military personnel past and present as well as cadets and members of the community gather in Coronation Gardens.

The West Midlands Fire Service Band will be playing and the Mayor will lay a wreath on behalf of Dudley Council.