Stourbridge Navigation Trust has bought the equipment, which can re-start a heart in the event of cardiac arrest.

The defibrillator was officially unveiled today (wed) by Councillor Alan Taylor as trustees, volunteers and local business representatives watched on. 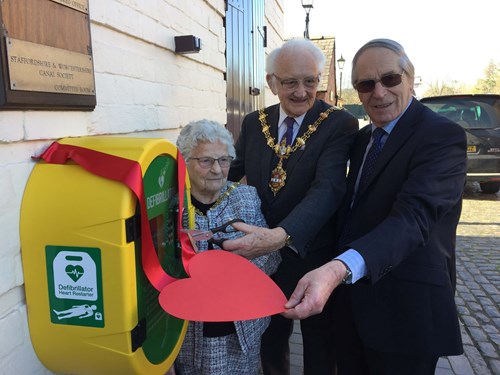 The Mayor and Mayoress of Dudley, Alan and Win Taylor, officially unveil the new defibrillator outside the Bonded Warehouse in Stourbridge with Stourbridge Navigation Trust chairman David Caunt

The area along the canal is very popular with walkers and visitors.

So we felt it was very much in the interests of everyone in the community to invest in a defibrillator which could potentially save lives in the event of a medical emergency.

We were delighted that the mayor was able to attend to officially unveil it.”

It is a medical fact that having defibrillators in close proximity can literally be the difference between life and death for people who suffer a heart attack.

This defibrillator will be available to anyone who needs it, and trustees and volunteers of the trust will be trained in how to use it should an emergency arise. Local businesses will also be able to take advantage of training too.

It is an excellent example of how organisations can use the council’s community forums to secure funding for projects to benefit everyone.”