The Mayor of Dudley has visited Black Country Radio to congratulate them on their recent Queen’s Award for Voluntary Service.

Black Country Radio was one of only two Dudley borough organisations to be given the award for services to the local community by providing a community broadcasting service in Dudley and the Black Country.

The Queen’s Award is equivalent to an MBE and the highest accolade that can be given to local voluntary groups in the UK.

The station was also acknowledged with a special designation for providing impactful support during the early months of the pandemic - one of only 13 organisations across the West Midlands to receive such recognition.

Black Country Radio provided a wide range of support during the first stage of the pandemic including launching Community Helpline which got vital and urgent support to more than 500 vulnerable people around the borough.

Councillor Anne Millward, the Mayor of Dudley visited the station to congratulate staff on receiving the award and to tour their new state-of-the-art facilities. 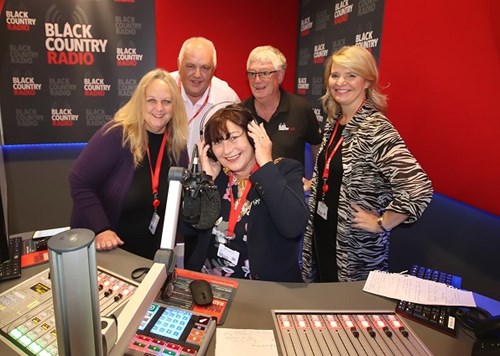 Black Country Radio is a station which prides itself on being at the heart of the community and there to support its listeners.

They are deserving recipients of the Queen’s Award and we are immensely proud of what they have achieved and continue to do for the people of this borough and across the Black Country.

At the height of the pandemic, the station stepped up and did what it could do to help others and I would like to thank all those involved for making a difference during the most challenging times.

I am absolutely delighted that we have received the award. This ultimate accolade is testament to the dedication and commitment of all our volunteers who provide not only entertainment for the local community but also information, radio documentaries, comprehensive local sports coverage, advice and support and so much more.

It is wonderful to be nationally recognised like this and it’s the ultimate thank you to our team and our supporters.”

Black Country Radio was launched in 2015 when 102.5 The Bridge and Black Country Community Radio stations merged.

In 2016 the station moved its studios Waterfront in Brierley Hill before relocating to the Resonance building, a new state-of-the-art Music Institute based in the former Cable Plaza building on the Waterfront.

The station broadcasts across the Black Country and Birmingham on 102.5 FM, DAB, online and has recently release an App that can be downloaded from App stores. The station prides itself on bringing the latest news, music and local topical debates to the people across the region.

The Friends and Residents of Buffery Park was the other Dudley borough organisation to receive the Queen’s Award.