Metro stop to be named after castle

Dudley’s landmark castle has inspired the name for a metro stop in the town centre, as work continues throughout the summer months to develop the line.

Originally named ‘Station Drive’ on plans, it has now been agreed the stop should be named Dudley Castle. 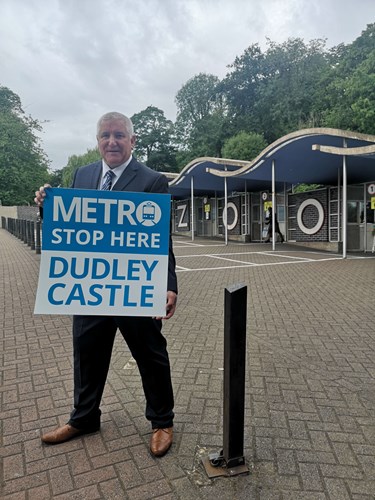 Connecting Dudley to the national rail network, the metro line will run to from Wednesbury to Brierley Hill, enabling people to travel more easily to Birmingham and other parts of the Black Country.

Working with Transport for West Midlands and the West Midlands Combined Authority, we have agreed this is the perfect name for the Metro stop closest to the Castle.

The Metro will be used by tourists visiting the area as well as by commuters and local residents and it was felt the name would celebrate the town’s heritage and visitor attraction appeal.

The Wednesbury to Brierley Hill Metro extension will boost public transport in the Black Country, providing much-needed links to the existing heavy and light rail networks, and helping to connect people to education, training and career opportunities further afield in the West Midlands.

The extension will also play its part in helping to regenerate the Sandwell, Dudley and Brierley Hill areas, making it more attractive to investors and providing easy access to the Merry Hill shopping centre and the region’s many and varied attractions via public transport. Once up and running there will be up to 17 new stops and the new system will also reduce journey times when compared to travelling by car.

Across the summer there are further preliminary works scheduled across both boroughs including continued utility diversions and upgrades between July and September in Castle Hill and Trindle Road in Dudley and the removal of a railway bridge in Tipton during August. Both sets of work will see localised lane restrictions or temporary closures.

Trindle Road will become one way towards the junction with Hall Street and King Street from Monday July 13. It is expected to stay in place until autumn, while the current lane closure on Castle Hill is expected to continue until August.

Ian Collins, Wednesbury to Brierley Hill Project Director at the Midland Metro Alliance, the organisation that is designing and building the route on behalf of Transport for West Midlands, said:

This is the first tram stop along the new route to have its name officially confirmed and is located to serve Dudley Town Centre and the numerous tourist attractions and entertainment venues in the area.

The Midland Metro Alliance is currently working to progress detailed design and is commencing some construction activities for the scheme, across both Sandwell and Dudley and also in the railway corridor where more than 7 kilometres of the route is to be built, whilst taking into account the important government guidance related to Covid-19.

During the works scheduled for the summer, Transport for West Midlands, the Midland Metro Alliance, Dudley and Sandwell Councils have teamed up to provide the following travel advice:

People can find more information about the Metro plans at www.metroalliance.co.uk or by following the Midland Metro Alliance on social media.