New housing developments in Netherton are now within reach after special machinery was brought onto site to demolish high-rise flats.

Dudley Council appointed contractors earlier this year to begin the demolition of Arley and Compton Court in Netherton. 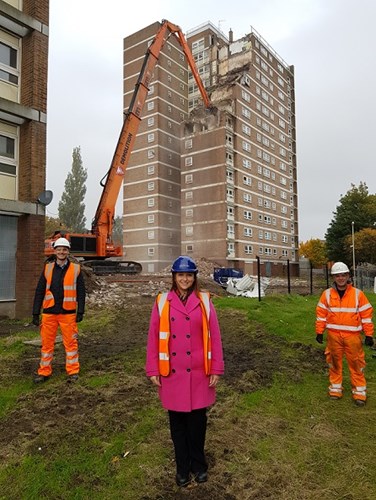 After preliminary work, the contractors have now brought a high reaching machine onto the site to begin the deconstruction of the decades-old flats.

The demolition of neighbouring Wells and Manor Court is expected to start in the coming weeks.

Following a survey of the council’s housing stock a few years ago the four blocks, which were built in the1960s, were deemed no longer fit for purpose and it was estimated it would cost millions of pounds to repair them and bring them up to modern-day standards.

The council took the decision to demolish the blocks and it is currently proposed to use the land to create new and affordable homes in the area.

The council has worked closely with residents and since October 2016 more than 180 tenants have moved to better housing.

I’m really excited to see that the demolition of the blocks is making good progress and local residents can now see the landscape in Netherton begin to change and that our commitment is there to provide new housing opportunities in the local area.

Contractors and the council are working with residents to minimise disruption as much as possible. The demolition of Arley Court and Compton Court should be complete by December 2020.