Mini movies on the big screen

Mini fans will be in heaven this June with two screenings of the cult caper film, the Italian Job as part of this summer’s drive in movie festival at Himley Hall.

Not only will the films be on screen, but hundreds of mini enthusiasts are expected to flock to the site in their iconic vehicles to ramp up the experience, warming up for their own Mini event at the hall on 1 August.

There are eleven movies to choose from over four themed day, with cars being the stars of the show on Saturday June 26. The morning starts with the animated film, Cars followed by the all-time classic Chitty, Chitty, Bang, Bang. Mini Club enthusiasts will be visiting the site and watching during the afternoon with screenings of the two versions of The Italian Job, firstly starting with the remake film of 2003 starring Mark Wahlberg and ending the day with the true classic 1969 version starring Michael Caine. 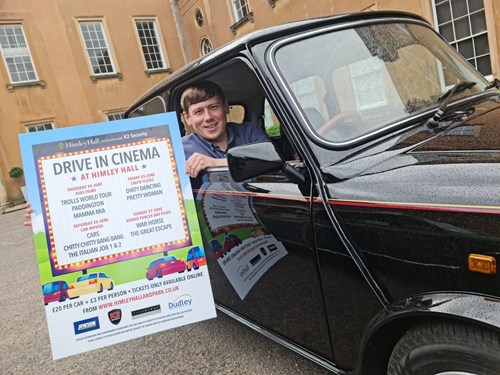 It was really great to meet David and the enthusiasts from the British Mini Club. I’m sure that having them on site for the screenings will add an extra dimension to the day.

The drive-in cinema is a great way for people to enjoy time together while still feeling reassured that they can social distance, and with four days of themed films there really is something for every age and interest to enjoy.

Families can enjoy kids films on Thursday 24 June with Trolls: World Tour with special appearances by stars Poppy and Branch. Paddington is next with the bear himself making an appearance at this showing. Thursday’s screenings conclude with family favourite Mamma Mia.

On Friday June 25 it’s chick flicks favourites day with Dirty Dancing followed by Pretty Woman. And it concludes with military day on Sunday 27 with The Great Escape and Michael Morpurgo’s War Horse.

As the films are all shown on a massive 100 square metre screen, viewers can tune their car radio in to hear the audio from the film.

A selection of street food vendors will be at the event or guests can bring along their own snacks and drinks to enjoy whilst watching the film. All cars will be spaced in 5 metre squares to comply with social distancing measures to make the event safe and enjoyable.

Himley Hall and Park Drive-in cinema, in association with K2 Security, tickets are only available online from Eventbrite via www.himleyhallandpark.co.uk and cost £20 per car plus £3.00 for each individual in the car.

Notes to editors
The drive-ins are being sponsored by K2 Security, Jewson and Fieldings Auctioneers Limited.

Find out more about the British Mini Club