New £18m leisure centre to be named after Duncan Edwards

Dudley’s new £18m leisure centre will be named after Duncan Edwards, it was revealed today.

Council chiefs said it would be called The Duncan Edwards Leisure Centre in honour of the borough’s most famous sporting son. 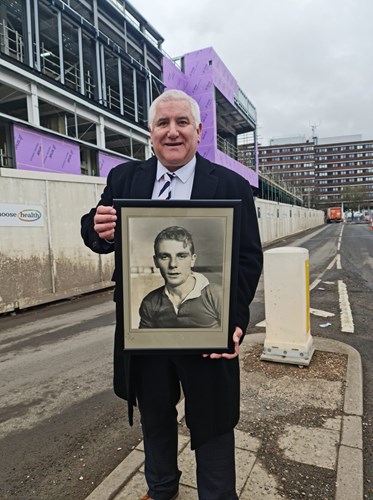 Dudley-born and bred Duncan was the heartbeat of Manchester United’s lauded Busby Babes and a full England international before he tragically lost his life in 1958 from injuries sustained in the Munich air disaster. He was just 21.

Duncan’s England caps and football shirts, along with other memorabilia, is currently on display at Dudley Museum, located on the first floor of the Archive Building in Tipton Road.

Work is progressing well on the new leisure centre in Flood Street, and council bosses hope it will be open to the public early next year.

We are forging our future in Dudley, with over £1 billion being spent on a number of exciting projects including the new leisure centre which will completely regenerate our borough.

But we’re also very proud of our past.

It is testament to how good he was that his achievements continue to be celebrated more than 60 years after his tragic death.

We think naming the new leisure centre after Duncan will be a fitting tribute to his legacy, and ensure his name continues to live on for future generations in the borough.

The new facility will include a 25 metre, eight-lane swimming pool and a teaching pool with spectator provision. There will be a four-court sports hall suitable for indoor football, badminton and more.

The investment will also include a 100-station gym and fitness suite, two group exercise studios for a wide range of exercise classes and an immersive cycle studio.

For families with younger children there will be a soft play area with catering facilities and a party room, and a café open to all users of the centre. And for those who want to relax after their workout session there’s set to be a sauna.

There will also be power-assisted gym equipment for specialist support which may be particularly beneficial for those recovering from injury, older customers and those living with long-term health conditions.

Millions are also being spent on revamps of Crystal Leisure Centre in Stourbridge and Halesowen Leisure Centre as part of the biggest spend on leisure services in the borough for decades.