New base for Saltwells Nature Reserve

A new £450k purpose-built base for Saltwells Nature Reserve looks set to be given the green light by council bosses.

The popular reserve, which is held in great affection by local people, has not had a permanent base on site for ten years, with wardens and volunteers instead travelling to the site each day. 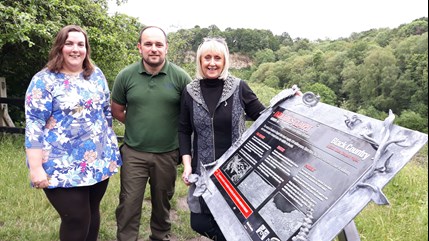 The new building will provide a base for the wardens as they carry out their essential work on the 250 acre reserve, and would also be used by the site’s dedicated volunteers, keen friend’s group and the local community.

It is hoped that once established, the new building will also act as a visitor and education centre, offering additional school visits, educational activities and forest schooling opportunities.  There is also ambition to develop the council’s apprenticeship programme by providing a training facility for City and Guilds Landscape apprenticeships.

The reserve already runs a range of events, including bluebell walks, green woodworking and currently hosts one of the largest health walks in the borough.

The council’s cabinet announced the plans for the base today and proposals will formally go to a meeting of the cabinet next week.

We know that not only is there a real business need for a new, purpose-built base on site but also that there is a real community drive for this to happen.

The reserve is busier than it has even been, with record numbers turning out for the recent bluebell walks and friends group numbers at an all-time high.

We’ve decided that investing in Saltwells will benefit the reserve, the immediate community and the younger generation through a range of educational, training and apprenticeship opportunities which we hope the base will open up.”

This is fantastic news for Saltwells Nature Reserve and for all the people who visit and work hard to keep this important areas so beautiful.

The new base will hopefully encourage more people into this fantastic area and enjoy all of the things it has to offer. The Friends group are absolutely ecstatic about this news.”

The cost of the build is around £450,000 and the new base would be set up on council owned land adjacent to the entrance of the site, a change from the old base which was located near the former Saltwells House. This will allow increased accessibility to the building for visitors.

Proposals go to cabinet on 27 June and if agreed, tenders will be sought over the summer to undertake the work.