Highways bosses have put pen to paper on a deal that will help tackle flooding on the roads by potentially clearing more blockages in the drainage system.

Dudley Council has signed a deal with Onsite Central Limited worth £1million over the next five years.

The agreement will allow crews to attend more of the gullies at the side of the road, which can become blocked with debris, to allow surface water to drain away.

Council bosses have invested an extra £90,000 into the clearing of gullies this financial year which will allow crews to work on a third of all estate gullies each year, resulting in all gullies being targeted every three years. Previously, gullies were cleaned when a problem was identified or when an issue was raised with the council. The new money will allow the crews to attend more gullies on a rolling programme. 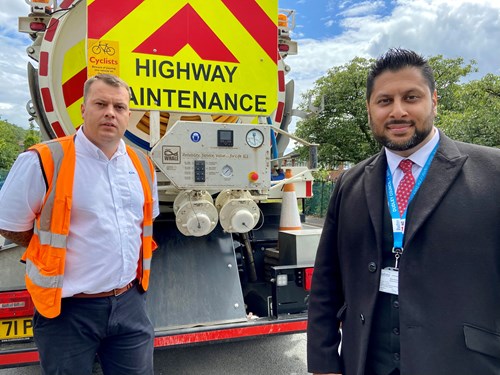 Main road gullies and channels in flooding hot spots are visited at least once a year to minimise the risk of issues on the road.

We have said that keeping our roads clear for people to use is one of our top priorities, which is demonstrated by the extra investment this year. The environmental impact of flooding on the roads is also very clear and we need to keep on top of that.

This new deal with Onsite is very welcome and we are very much looking forward to working together on this important issue. 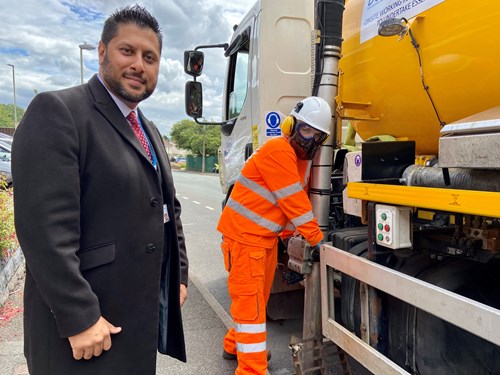 Onsite, a wastewater and drainage specialist, is part of the South Staffordshire Plc Group and has the resources to deliver a first-rate service to the council.

They have already tackled 2,600 drains across the borough in just five weeks, removing 30 tonnes of grit and debris from the roads.

We take great pride in providing essential services such as this to our local council partners, it’s fantastic to see the commitment Dudley Council has made to proactively maintain their highways drainage asset , real investment benefiting the community. Roadside drainage is a key service line for us, and our teams are vastly experienced in supporting clients with this important work and we can’t wait to get started to help the council in their mission to reduce local roads flooding due to debris build-up. Pictured: (top) Councillor Shaz Saleem with Mark Hunt, OnSite project delivery manager. Pictured: (bottom) Councillor Shaz Saleem with Josh Beckley, HGV assistant.