Council bosses and police have put pen to paper on a new joint agreement to tackle unauthorised traveller encampments in the borough.

The new measures aim to make it quicker for Dudley Council and police to deal with illegal encampments on public land.

At the same time, the council is pressing ahead with a travellers transit site in Budden Road, Coseley, to further strengthen powers to move travellers on from public land. 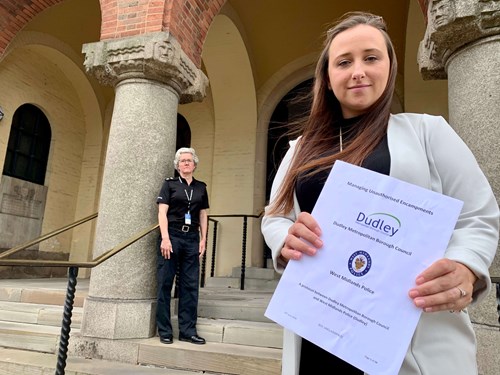 The new temporary transit site is expected to be up and running by August. The council will be responsible for the day-to-day running of the site.

The Managing Unauthorised Encampments Joint Protocol between the council and West Midlands Police will act as a guide to working together to best manage incursions with a co-ordinated response. Council bosses and police signed the new protocol this week.

This is about setting out very clearly, how we are going to work together to tackle unauthorised traveller encampments in the borough. We have to make sure we do everything we can to minimise disruption for residents while exercising our increased powers in being able to move travellers to the new transit site.

The transit site is very much a deterrent, and from our research into similar sites, we expect it to be very rarely used. What it does do is give us greater powers, along with our partners in the police, to move unauthorised encampments on quicker.

I very much welcome this new protocol which cements an already excellent working relationship with the police.

The members of an unauthorised encampment will be reminded of the option to relocate to Budden Road. Failure to comply could lead to enforcement actions, arrests, vehicles being seized and being banned from returning to the borough for three months. The council and police continuously work in partnership to provide safeguarding support to protect the most vulnerable of all communities.

Our work as a partnership in Dudley has resulted in a robust joint protocol to address unauthorised encampments. This strikes a balance between supporting both the settled and also the Gypsy, Roma and Traveller communities in our borough.

Dudley Council will take the lead with support from Dudley Police to unlock special powers which allow the police to direct Unauthorised Encampments to a designated site.

The use of the transit site will see a reduction in unauthorised camps in Dudley and provide support to travelling families, providing a consistent approach.

Dudley Council received planning approval for the Budden Road site in 2018. The plans were shelved while the council carried out further extensive searches for an alternative site.

But the plans for the temporary Coseley site were put back on the table earlier this year after exhaustive searches for alternative sites.

Sandwell already has a site in place and Wolverhampton and Walsall are also looking at potential sites – increasing pressure on Dudley Council to avoid a displacement of unauthorised encampments from elsewhere in the Black Country. Evidence from Sandwell suggests that the site will be used extremely rarely and will not cause disruption to the lives of the local community.

The Coseley site will be monitored closely with council bosses keen to reassure local residents who have previously expressed concerns about the proposal. The council is currently spending around £150,000 a year on legal fees and clean-up costs.