The new Mayor of Dudley has vowed to do all he can to raise money for worthy causes during his year in office.

Councillor David Stanley was named Mayor of Dudley for the next 12 months at a meeting of the full council tonight (Thursday). 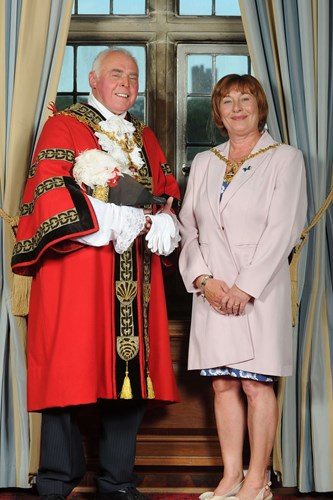 He announced two charities he wants to support during the year which are Macmillan Cancer Support and Wildlife Trusts Birmingham and Black Country.

Councillor Stanley named Councillor Anne Millward, a former leader of the council, as his consort.

Together they will spend their time raising the profile of good causes, celebrating diverse communities and championing businesses in the borough.

It is a real honour to have been chosen to serve the people of this borough as Mayor of Dudley. It gives me a unique opportunity to visit communities all over the borough as well as raise vital money for two important charities.

It is the second time Councillor Stanley has served as the borough’s first citizen after a previous stint in 2007.

The Gornal ward councillor replaces Councillor Alan Taylor who served as Mayor for the past year, and deputy mayor the year before that.

Councillor Hilary Bills continues in her role as Deputy Mayor with her husband continuing as her consort.

People can keep up to date with the Mayoral activities, invite him to events and donate online to charity online at https://www.mayorofdudley.org.uk/