The new Mayor of Dudley has praised the late Duke of Edinburgh for his “inspirational” support for young people and has also announced a new community fund as she outlined her charity commitments for the year ahead.

Councillor Anne Millward, who was named the new Mayor of Dudley as a meeting of the full council this evening (THURS), also named Dudley Mind as one of her chosen charities.

She committed to raising money for the Duke of Edinburgh awards scheme as she paid tribute to Prince Philip, who sadly passed away last month. 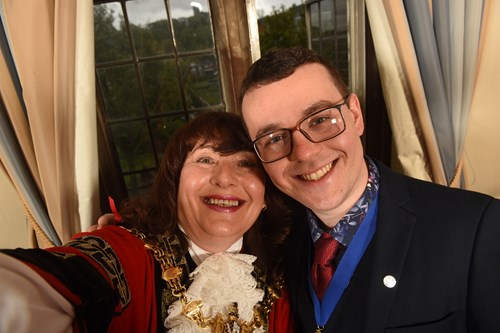 Councillor Millward also vowed to set up a special community fund to help community groups and voluntary groups. The fund will provide money for small projects and help groups access equipment, following a difficult year caused by the coronavirus pandemic.

She will also be raising money and awareness for Dudley Mind which is a mental health charity aiming to improve and promote recovery and wellbeing for people across the Black Country.

The borough’s first citizen urged people to do what they could to help raise money.

I am extremely proud and honoured to serve this borough as Mayor and I will do all I can to build on the excellent work of the Mayors who have served before me.

Dudley Mind also does some incredible work to support people affected by poor mental health. I want to do all I can to help them carry on doing that – particularly after the year we have just had when many people will have struggled. “In addition to that, the community fund is about helping borough groups who have been hit hard over the past year. It is vital we continue to give them access to funding so they can continue their important work.

We will be announcing the details of how that will work in due course, but the Mayoral role gives me a unique opportunity to help people who need it most and I am very much looking forward to doing that.

Councillor Millward named her son, Jack, as consort for her 12 months in office. The Gornal councillor and former leader of the council replaces Councillor David Stanley who served as Mayor for two consecutive years as the pandemic meant there were no elections last year.

For more information on the Mayor visit https://www.mayorofdudley.org.uk/