New posters have gone up across the borough targeting fly-tippers and litter louts. 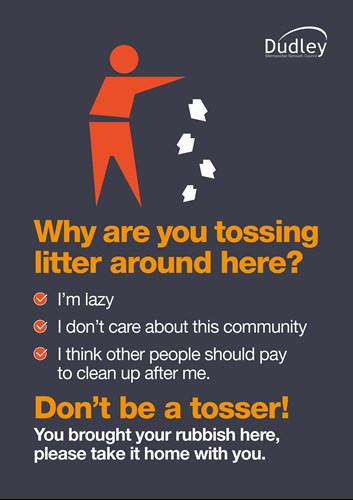 The strong message behind the campaign was originally launched by City of York Council. Since lockdown restrictions were eased, Dudley Council has seen an increase in fly-tipping and rubbish dumped at borough beauty spots and green spaces.

Figures released earlier this year revealed there had been nearly 7,000 recorded incidents of fly-tipping in the borough between 2011/12 and 2018/19, costing the council £371,382 in clean-up costs.

The new campaign ties in with The Dudley Deal, an informal agreement between the council and anyone who lives, works or runs a business in the borough. One of the strands, The Green Deal, commits the local authority to carry out bin collections and street cleansing services while residents are asked to play their part and dispose of waste responsibly.

Fly-tipping or dropping litter is totally unacceptable at any time but even more so at the moment, when the council has to prioritise doing all it can to keep essential services running and support the most vulnerable people in society.

The new poster campaign uses strong language to highlight our zero tolerance approach to this.

Our staff will investigate every single incident reported to us so think twice, as anyone found to be responsible for fly-tipping could be liable for fines of up to £50,000 through the courts. Fixed penalty notices of £75 will also be handed to anyone who is caught dropping litter.

We do not want our beauty spots and green spaces, or indeed anywhere in the borough, to become dumping grounds - anyone who is caught will feel the full force of the law.

People can report fly-tipping by calling 0300 555 2345, emailing dudleycouncilplus@dudley.gov.uk or online at www.dudley.gov.uk.
People can also report via Twitter at @dudleyplus.

More information on the Dudley Deal is available at https://www.dudley.gov.uk/council-community/your-council/the-dudley-deal/