A Stourbridge based military intelligence unit will be officially granted freedom of the borough in the prestigious grounds of Himley Hall and Park later this month.

Earlier in the year, Dudley Council announced plans to grant freedom of the borough to 63 Military Intelligence Company, based at the Army Reserve Centre in Swinford Road.

The unit is now just days away from officially being granted its freedom at the council-run Armed Forces Day event on Sunday June 30.

The unit will be presented with its freedom scroll from the Mayor of Dudley and take part in a parade on the lawn in front of Himley Hall at approximately 2.30pm, as part of the afternoon proceedings. 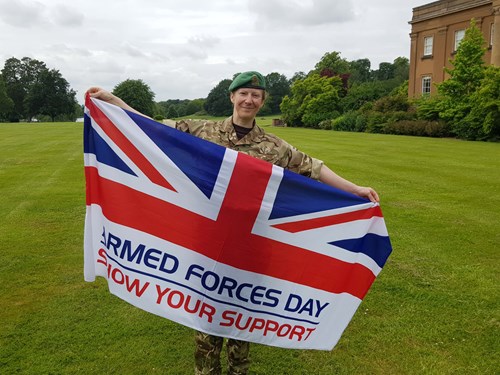 It has a contingent of 94 reservists and specialises in training them to become military intelligence analysts to support complex operations.

Reservists have been deployed to work alongside their regular Army Intelligence Corps colleagues in areas of conflict.

63 Military Intelligence Company is the fifth military organisation to be granted Freedom of the Borough since 2000.

Dudley Council’s Armed Forces Day celebrations are all about giving thanks to every single person who has served in the military to protect the freedom of today’s and future generations.

For us, it also offers the most fitting opportunity to formally present freedom to the reserves serving in 63 Military Intelligence Company and recognise the vital role they play within the armed forces and ensure their contribution is never forgotten.

We are extremely proud to have this honour bestowed by Dudley Council in recognition of the service provided by our personnel.

Our company has been based in Stourbridge for over twelve years and recruits soldiers from both the Black Country and wider Midlands area.

In modern warfare, knowledge really is power. Military operations rely upon timely, accurate intelligence. The information gathered by our soldiers plays a vital role in protecting the British Army’s operations from hostile forces.

Armed Forces Day is free annual event, which takes place from 11am to 5pm. There’s loads to see and do throughout the day including vintage fairground rides, Punch and Judy shows, craft, food and vintage stalls as well as paint balling provided by Dudley Army Cadet Force and an archery range, provided by Kingswinford Air Cadet Squadron.

Pete’s War Time Show and Victory Gal Melissa will keep the crowds entertained in the park with classic war time era songs and stories while overhead the Royal Air Force Battle of Britain Memorial Flight team will be flying past in an original 1940s Dakota.