The former mayor of Dudley has been hailed by three local charities – after handing over more than £58,000 raised from his year in office. 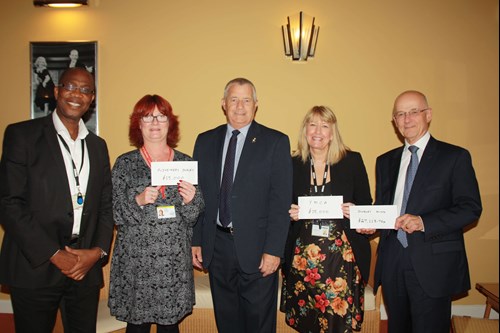 It was an honour to serve as Mayor of Dudley, alongside my wife Barbara, and to be able to help raise funds for these charities which are so close to my heart.

These organisations will be able to use this money to support people when they or a family member are going through difficult times and I feel humbled to have been able to play a small part in supporting their important work.

My wife and I would like to say a massive thank you to all the individuals, groups and organisations that generously contributed throughout the year to help raise such a large amount of money.

Dave racked up hundreds of civic engagements, fundraising events, business visits and other activities during his Mayoral year.

It included a hugely successful Mayor’s charity ball and a sportsman’s dinner with Liverpool legend Kevin Keegan, as well as a range of other events to help generate the cash for his three charities.

We’re delighted to receive the money from the Mayor.

We do a fantastic job for people with dementia, and their carers, and we couldn’t continue the work that we do without the support from people like Dave and Barbara.

It will be used to cover ongoing costs for providing the services we’ve already got - things like our dementia cafes, dementia support workers, dementia navigators.

Receiving the money is fantastic and will make a huge difference, because we are going to use that to recruit more hosts in the Dudley borough that will go on to support young people.

The experience of being one of the Mayor’s charities is just fantastic, we feel that the whole year it’s helped to raise the profile of the project. It’s been amazing, and we’d like to thank Dave, Barbara and all the team.

It will go a long way to helping us to provide services to those with mental health problems in the local area.

The theme for this year is based around mental health for young people, so there is a good possibility it could go towards that.

Being Mayor of Dudley is a real honour and brings so many opportunities to meet people from across our wonderful borough. Most importantly, we are able to help raise the profile of charitable organisations and play a part in raising funds to help support their efforts.

Congratulations to Dave and Barbara on their successful year and I hope that people will be as generous this year to help me support my three charities.

This year’s charities are:

White House Cancer Support, which supports people with cancer, their families and friends

The Hope Centre, Halesowen, a charity with a Christian ethos which looks to provide practical and emotional support to people at their point of need.