A new painting capturing the spirit of the Black Country will hang in pride of place in Dudley Council House following a special competition to celebrate the region.

The Mayor challenged photographers and artists to produce a piece that celebrated all things Black Country earlier this year. 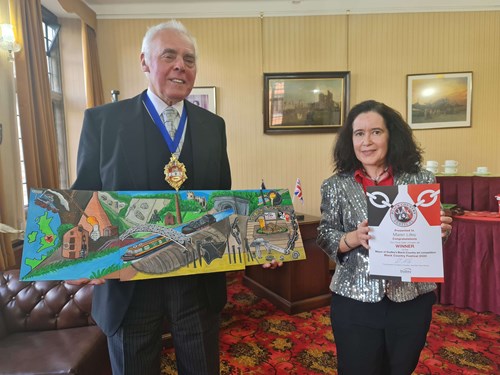 The competition was part of the Black Country Festival which was forced to scale down because of the coronavirus pandemic.

Maren Lilley’s acrylic painting of life in the Black Country captured the Mayor’s attention over more than 100 entries. The painting depicts the canal system which was so important to the region during the industrial revolution, as well as iconic places such as the Red House Glass Cone and Dudley Castle.

The 51-year-old admin worker from Dudley will now have her special piece of artwork added to the walls of the Mayor’s parlour in the Council House.

I love living in Dudley and there’s so much to celebrate about being part of the Black Country.

I love to paint so this subject was something that really appealed to me. I think I managed to capture most things - the canal system, the industrial heritage, the castle and of course, the Black Country flag.

I’m very honoured to have my work hang in the Council House.

More than 100 paintings and pictures were submitted as part of the competition with the Mayor carefully selecting one winner. Maren popped to the Council House to formally present her winning painting today, but the painting will be added to the wall at a later date.

The response to the competition was overwhelming – we really do have an enormous amount of talent in the borough. Choosing one was very difficult but Mrs Lilley’s painting really stood out to me. It managed to include so many iconic symbols of the Black Country and I am sure visitors will spend a long time looking at all of the different things to spot.