A PE teacher and former footballer from Dudley is proving a knockout after donning the gloves to become a professional boxer.

Kirstie Bavington, who works during the day at Castle High School, met the Mayor of Dudley, Councillor Alan Taylor, to reveal her dreams of working her way to the top and inspiring others along the way.

The 25-year-old welterweight has had two pro fights so far and is still unbeaten. She drew a hard-fought debut bout with Bulgarian veteran Borislava Goranova at Villa Park in May before beating Elaine Greenan on points at The Venue in Dudley earlier this month. 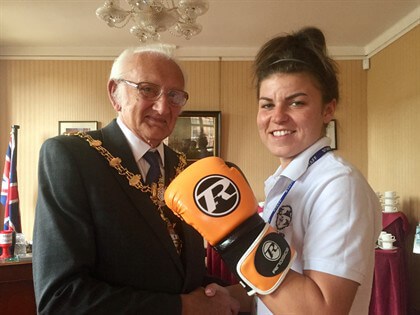 Kirstie’s first love was football, breaking into Brierley Hill Bullets boys team at the age of seven before going on to play for the likes of Wolves, West Bromwich Albion, Birmingham City, Coventry City, Crystal Palace and AFC Wimbledon.

But she has now hung up her boots for good to focus on the boxing, with a third bout planned for late September.

All my life I have played sport and now my aim is to inspire others to participate in some way, not only through teaching PE but also through my professional boxing career.

I started boxing to improve my fitness to begin with for football, but then it became an addiction.

My goal and ambition is to inspire women all over the world. I want to become a champion and achieve all my dreams in sport.

I have worked hard to be where I am, especially after a bad cruciate ligament injury six years ago. This time, nothing will stop me in my bid to become the best.

It was great to meet Kirstie – she brought her gloves with her but thankfully didn’t land any blows!

It’s clear to see how hard she is working to achieve her dreams and I really hope that she does.

She is an inspiration, not just to women but to everyone. I wish her all the best in the future and look forward to hearing about her future successes.