An artist impression of new affordable council homes which could replace an unsightly row of shops in Colley Gate has been released.

Dudley Council is working on proposals to build eight new properties on land off Colley Lane in Halesowen. 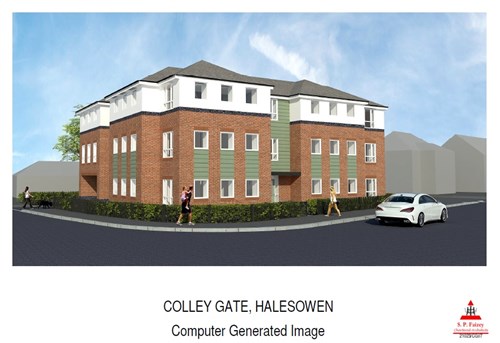 The development, which would cost approximately £1.4 million, would be the latest project as part of the council’s commitment to building new council homes in the borough.

Currently four empty shops sit on the land. The council owns one of the properties and is the process of acquiring the remaining three.

If approved, the development would include eight one bedroom apartments, which would be available to rent to people on the council’s waiting list.

A number of other projects to build new council homes are underway right now in locations across the borough including Pensnett, Stourbridge and Russells Hall.

We’ve been looking at how we could redevelop this blot on the landscape for a long time and I am really pleased we now have plans on the table that offer the best opportunity to regenerate this area.

We know local residents are keen to see something happen here and I hope they welcome the proposals we are putting forward for planning.

“This is a major regeneration opportunity to transform this area of Colley Gate and I’m confident we can make this happen.