Parents who park dangerously outside borough schools could be fined – and even taken to court - in a new initiative being launched by Dudley Council and West Midlands Police.

Operation Park Safe starts on Monday (5 October) in a bid to make streets outside schools safer for children, staff and parents.

The new initiative will see police asking parents, teachers and residents living near to schools to be their eyes and ears. 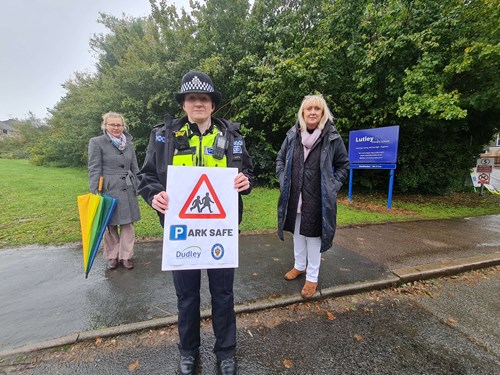 Police will be inviting people to send photos of dangerous parking directly to officers. Police will review the evidence before deciding whether to issue fixed penalty notices or take court action.

Examples of dangerous parking where action can be taken includes parking on pedestrian crossing or school zig zag lines, as well as near to school entrances in a manner which would prevent access for emergency services vehicles.

We are aware that increasing numbers of parents are driving their children to school at the moment as a result of the Covid-19 pandemic.

My overriding concern is the safety of our children, and it is disappointing that despite several reminders we continue to see lazy, inconsiderate and dangerous parking on a daily basis outside our schools.

It is for this reason that we are introducing Operation Park Safe to the schools in our borough.

We would prefer for the police not to have to issue a single penalty notice. But the warning is now there - if any person continues to park in this way then action will be taken.

The council, the police and the schools themselves receive hundreds of complaints every year regarding inconsiderate and obstructive parking at the start and the end of the school day.

We are asking those parents who have to drive children to school to make sure their parking does not cause danger to pupils, pedestrians or passing traffic, or that it does not inconvenience local residents.

If this continues to happen, we want people to get photographic evidence and to share it with the police so the appropriate action can be taken. Anything submitted will be treated in confidence.

We’re hearing from parents with pushchairs who are being forced into the road because cars are blocking pavements.

Some cars are pretty much dumped at junctions; they obstruct other drivers’ views and increase the chances of collisions occurring. This kind of behaviour isn’t just a nuisance - it can have fatal consequences and we’re determined to show motorists it’s not acceptable.

Residents, parents and teachers have asked us to take action, and that’s exactly what we’re doing.

We will be liaising regularly with our schools to check compliance, if we find cars parked irresponsibly or dangerously near schools the driver can expect to be fined. And if officers aren’t there in person at the time we will use photographs provided by members of the public and school staff to take retrospective action.