The first ever pop-up tip in Dudley has been hailed a success and will be extended to allow more items, it was announced today.

Hundreds of people came to the Lister Road tip on Saturday to dispose of their household waste. 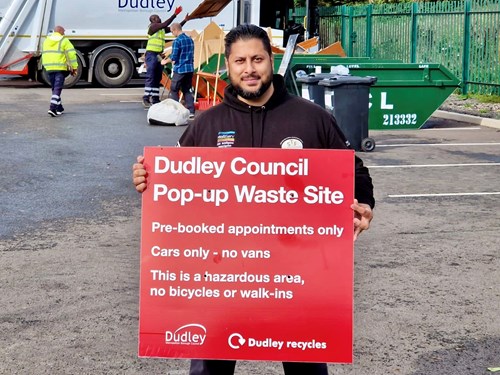 The scheme was so successful, Dudley Council has announced a number of improvements including allowing mattresses and furniture from now on.

The first pop-up tip was a resounding success and I am delighted with the response from the public. We have, and will continue to listen to what people want, which is why we will be allowing mattresses and furniture at future sessions. To see so many people from the north of the borough was also particularly pleasing as it shows there is a need. This exciting new venture will boost Dudley’s capacity to be even more efficient in its overall recycling goal. In doing so, the people of Dudley will all be able to play a better role in addressing climate change to get us closer to the overall goal of reaching net zero for Dudley borough.

The pop-up facility was set up to meet demand for a tip to cover the north of the borough.

The first session on Saturday saw 40 per cent of visitors from Coseley and 30 per cent from Sedgley.

The pop-up service will run on the third Saturday of every month from 8am to 3.30pm.

Visitors need to book their trip in advance using the nationally recognised booking system. Bookings will be live from Wednesday (Oct 26) www.dudley.gov.uk/residents/bins-and-recycling/household-waste-recycling-centre/

Oils and hazardous waste will not be accepted.