The three nominees for the Mayor’s Pride of Dudley Award have been announced, with a public vote now open to decide the winner.

Mary Stevens Hospice Pantomime Company, All Stars Youth Club and Growing in the Park by Dudley Mind will all vie for votes to take the award.

The three organisations have been selected personally by the Mayor of Dudley, Councillor David Stanley, following hundreds of visits made across the borough during his year in office.

The award will be given out as part of the Mayor’s Ball and Civic Awards, due to be held at The Copthorne Hotel in Brierley Hill on Friday March 27.

The group has now performed three sold out pantomime runs at Stourbridge Town Hall over the past six years with guest stars including Wagner from X Factor, BGT finalist Donchez and Benefit Street’s White Dee.

The most recent pantomime, Aladdin, played at the town hall to more than 3,000 people over eight shows at the end of last year. It raised a staggering £17,000 and has been shortlisted for “Best West Midlands Pantomime” in the prestigious What’s On Readers Awards. We are extremely proud of everyone involved with the Mary Stevens Hospice Pantomime Company.

From actors to backstage crew, costume dressers to sound and lighting technicians, we are in awe of their talent and commitment to the cause.

The funds raised from Aladdin and the other two pantos have helped us to continue to provide the vital specialist care to those in our borough who are at the end of their lives.

All Stars Youth Club caters for young people with special educational needs and disabilities, from the age of eight to 30 years. The youth club offers a range of activities such as arts and crafts, sport, cooking, day trips and residentials.

It is run entirely by volunteers from Himley Road Methodist Church on Tuesday evenings and costs £3 per session. In charge are mother and son Victoria and Kyle Harper, who is just 15. It’s absolutely amazing to be nominated for this award, not just for me and my mom but for everyone who gives up their time to help out.

We want to expand the club and get even more people in, so hopefully this nomination will raise our profile a bit more and alert people to where we are and what we are doing.

Growing in the Park by Dudley Mind is an award-winning project which seeks to support people struggling with mental health issues through gardening. Anyone over the age of 18 can attend the sessions on Mondays and Wednesdays at Wollescote Park, where the group looks after the walled garden.

The project provides activities, skills training and friendship for people with, or at risk of, isolation and poor mental health. 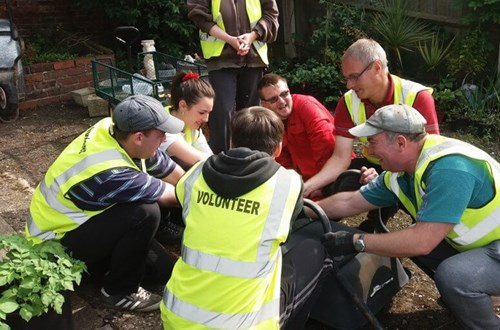 Dudley Mind is thrilled to have been nominated for the Mayor’s Award for their Growing in the Park project in the walled garden at Wollescote.

Winning would be fantastic recognition for the gardening team who volunteer their time to maintain and develop the garden for the benefit of the whole community.

Some people join when they are at a very low point in their lives and find that working together, in the fresh air and seeing the results of their efforts brings friendship, new skills and a sense of achievement, helping to improve their own wellbeing in the process.

The public vote is open until Tuesday March 17, and people can vote at https://www.mayorofdudley.org.uk/mayors-award We have three nominees this year and the public vote is now open, so I would urge people to get in touch and vote for their favourite.

Whoever wins will be fully deserving of such an award, and I look forward to seeing the result on March 27.