The beautiful Peace Gardens at Stevens Park are to be improved as part of a National Lottery funded restoration project.

Dudley Council is collaborating with The Friends of Stevens Park and the Emily Jordan Foundation, which enables people with learning disabilities to work with support from the local community, to make a number of improvements at the Quarry Bank beauty spot. 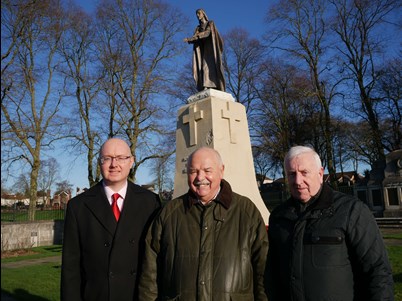 Ernest Stevens added the park’s Peace Gardens in 1931 and it has been a Grade 2 listed memorial since 2017. Local architect Alfred Long designed the memorial and noted artist George Wade produced the garden’s sculpture of Christ.

The Peace gardens are unusual in that Ernest Stevens was keen to emphasise the importance of peace after the First World War. Very few memorials during this period had this focus and rarely would have had a depiction of Christ.

147 soldiers were honoured after the 1914-18 conflict and a further 50 soldiers added after World War Two. Subsequently a soldier who died in Afghanistan has also been added.

The works, funded jointly by a Heritage Lottery Fund and Big Lottery Fund grant, will help to secure the space for future generations by preserving the memorial and statue and improving the footpath. It will also make the space more accessible for buggy and wheelchair users.

The Peace Gardens are an important space where people can remember those who have given their lives in service and the many who continue to serve our country with honour and bravery.

The gardens also play a vital role in people’s wellbeing - giving them somewhere that they can relax and reflect on adversity that they may be facing in their own lives.

We are delighted to be delivering on this improvement work, which we know means a lot to our residents and will help to preserve the gardens for the many generations to come.”

Further plans for the park will be finalised in the coming months including restoration of gates, bandstand, footpaths and entrances. The park’s heritage will be highlighted to visitors, improvements to bio-diversity will be made and school and community activities will take place.

The park’s historical Tintern House on Park Road, sometimes called the Whitehouse building, will undergo extensive refurbishment. A sympathetic extension is proposed to the back to allow space for a community café, where hot and cold drinks and light food will be served. The Emily Jordan Foundation will use the building to undertake a number of skill and training sessions.

Ernest Stevens, who was born and bred in Quarry Bank, gifted the park grounds and Tintern House to Quarry Bank Urban District council in 1921. Once a Victorian farm, it then became recreational space for people to enjoy in the local community.

David Sparks, Chair of the Friends of the Park, said:

The last year has been dominated by the commemoration of the final year of the First World War. It is fitting that we now focus on the first year of the peace, just as Ernest Stevens did when he laid down the Peace Garden in Quarry Bank Park.

The HLF funding will allow accessibility and help secure the future good order of what is a unique feature of our national and local heritage.”

Funding will allow the memorial to be maintained and cleaned and disabled access to the memorial, which is essential for those less able veterans and visitors who wish to come and pay their respects not only at Remembrance time but throughout the year.

There are 198 names remembered from three conflicts and we shall never forget them.”

The final amount due from HLF is £1.4m, total project costs with match funding is £1.8m.

A word from Big Lottery Fund:

We are the largest community funder in the UK – we’re proud to award money raised by National Lottery players to communities across England, Scotland, Wales and Northern Ireland. Since June 2004, we have made over 200,000 grants and awarded over £9 billion to projects that have benefited millions of people.

We are passionate about funding great ideas that matter to communities and make a difference to people’s lives. At the heart of everything we do is the belief that when people are in the lead, communities thrive. Thanks to the support of National Lottery players, our funding is open to everyone. We’re privileged to be able to work with the smallest of local groups right up to UK-wide charities, enabling people and communities to bring their ambitions to life.