More than 60 personnel from RAF Cosford marched through the town for the first time today ‘with swords drawn, bayonets fixed, colours flying, drums beating and bands playing’ after receiving the Freedom of Dudley Borough. 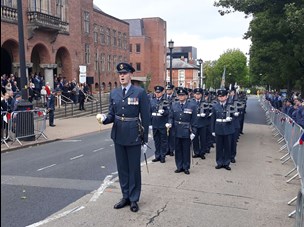 It has been a real honour to present RAF Cosford with the Freedom of the Borough of Dudley today. We are so proud of our strong links with the armed forces and as we mark the centenary of the formation of the Royal Air Force, it makes the occasion especially poignant. Events like this remind us all of the huge sacrifice they make and it was wonderful to see so many people come out today to show their support.

What an honour it is for RAF Cosford to receive the Freedom of the Borough of Dudley during the RAF’s centenary year. A Dudley man myself, I joined the RAF in 1989 and began my engineering career at Cosford. To be in a position almost 30 years later to forge even closer links between my hometown and the station where my RAF career began is a source of immense personal pride. I know that the men and women of RAF Cosford also take great pride in the strong relationship between the station and the heart of the Black Country. We were delighted to have the opportunity to celebrate that relationship today.

Following the ceremony on the steps of the council house, RAF Cosford, accompanied by cadets from six local air cadet squadrons and the RAF Cosford Voluntary band, marched through the town.
A ceremony at St Thomas and St Luke’s Church (Top Church) paid tribute to the heroes of the Battle of Britain before a return parade through the town centre and the laying of wreaths at the cenotaph in Ednam Road, Dudley.