A new entertainment venue will bring the latest in live comedy and music to the Waterfront when it opens its doors to the public later this month.

Vicki Wilkes and her husband Darren are the driving force behind Red by Night, a new bar and live entertainment venue on the canal side at the Waterfront.

The venue, once the popular PJs bar, had stood empty for more than ten years before the entrepreneurs decided to bring it back to life. 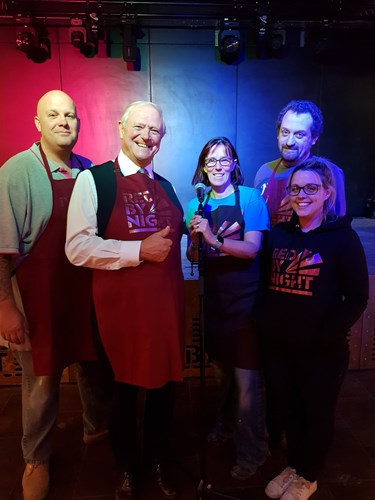 On their new venture, Vicki comments:

Darren and I have worked together for a long time and ran a successful engineering business, based in Brierley Hill, so we know the area well and remember those fantastic nights out at the Waterfront all those years ago.

In our old jobs, we’ve been lucky enough to travel the world and work with huge global corporations

But three years ago we sold the business and after some soul searching and toying with the idea of opening a bar in Austria, we decided the Waterfront was the place we wanted to be.

Red by Night, named in honour of the Black Country’s industrial heritage will be the 43rd new business to open at the Waterfront since Dudley Council secured enterprise zone status for the area back in 2017.

Vicki and Darren are investing £250,000 in transforming the rundown unit. Darren is putting his engineering skills to good use, designing Red by Night themed features throughout the venue. And in honour of their waterside location, the side of an old canal barge will form the front of the new bar.

If anyone had asked me ten years ago, where I saw myself in the future, I would never have dreamed of being where we are now.

We’re putting our hearts and souls into this project. We’re passionate about providing a high quality experience for our customers and don’t believe in cutting corners.

We’re also hugely passionate about the Waterfront regeneration and our business being part of its success.

We want everyone to feel welcome and plan to have student nights when the new music university “Resonance” opens but on the whole we’ll generally be tailoring to a more mature crowd. We plan to have a range of different styles of music, live bands, comedy and regular open mic nights.

We’re also really grateful for the support from Dudley Council to help guide us through the planning and licensing processes and from Dudley Business First for their business advice as we apply for the benefits of being within the enterprise zone.

Vicki and Darren will employ approximately 15 members of staff as part of their new venture, including new bar manager Rachel Marson, who used to manage the bar in PJs.  The venue will be open to the public from October 26.

We’re really pleased to welcome Red by Night to the Waterfront and DY5, Dudley’s Business and Innovation Enterprise Zone.

With the increased number of people now working at the Waterfront as a result of the enterprise zone and the influx of students in the future, it’s great that the retail and leisure offer at Waterfront is expanding to support this growing community and provide quality dining and entertainment experiences that it desperately needs.

I wish Red by Night all the best for their opening night.

The new venue will be open Wednesday to Sunday. For more information about the venue follow Red by Night on Facebook (@redbynightvenue).