Reduce, reuse, recycle - it's as easy as ABC

Children from a Dudley primary school are showing grown-ups how it’s done in a new campaign which explains how reducing waste is child’s play.

Pupils from Roberts Primary School in Lower Gornal are the faces and voices of the 3 R’s ‘Reduce, Reuse, Recycle’ campaign which encourages people across the borough to do their bit for the environment.

The eight youngsters, aged six to 10, have all learnt about green issues at the school’s Environment Zone and through the campaign they explain to borough residents how doing the 3 R’s is ‘as easy as ABC’. 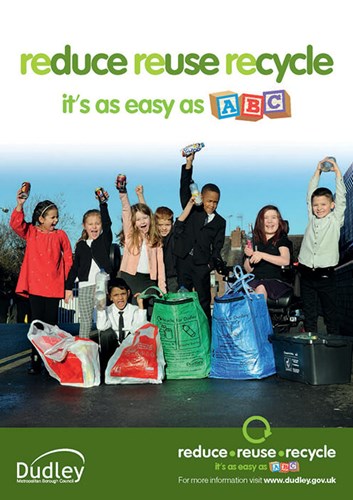 As well as being the face of the campaign in a series of posters and bus back advertising they are the stars of a series of news bulletin inspired short films, and can be spotted on the council’s twitter, facebook and youtube feeds.

The children, were absolutely brilliant on camera, they clearly know their stuff when it comes to the 3 R’s and I think people will learn a lot from their films.

Around 40 per cent of adults in Dudley borough are still not recycling household waste. It’s really not difficult to do, if the kids can do it, so can we.”

In 2017/18 households recycled 8,600 tonnes of paper and cardboard, 2,500 tonnes of plastic, bottles and cans and 5,700 tonnes of glass. The campaign aims to increase recycling rates and also encourage people to reduce waste and reuse items wherever possible.

It is estimated that average households waste around £70 per month on unneeded food being thrown out. Simple tips like making a shopping list, planning meals and freezing leftovers can make a big difference and save on grocery bills.

More information on recycling in Dudley borough, as well as tips of how to reuse and donate items which are still of use, can be found at www.dudley.gov.uk