The Mayor of Dudley is urging people to show their support for Royal Air Force personnel past and present at a special double celebration in the town next week.

RAF Cosford will officially receive the Freedom of Dudley Borough during a special ceremony on the steps of the Council House at 10.30am on Sunday September 16. 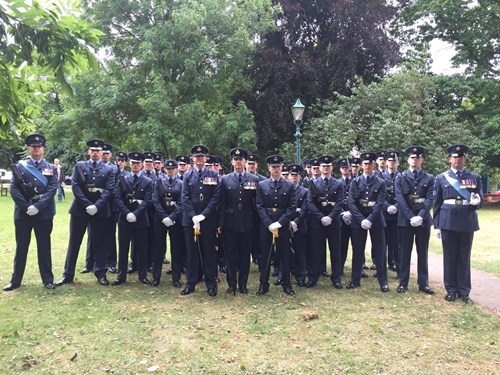 The event, organised in partnership between Dudley Council and Dudley Royal Air Forces Association (RAFA), will also be marking the Second World War battle, the Battle of Britain.

The event will begin at 10.15am with music from the RAF Cosford Voluntary Band before RAF Cosford march to the steps of the Council House for the ceremony. This will be followed by a parade through the town accompanied by cadets from six local air cadet squadrons.

The day will include a service at St Thomas and St Luke’s Church (Top Church) which will pay tribute to the heroes of the World War II battle of the sky before a return parade through the town centre and the laying of wreaths at the cenotaph in Ednam Road, Dudley.

We are proud of our strong links with the armed forces and are honoured that RAF Cosford will be accepting the honour of Freedom of the Borough of Dudley.

This year, being the centenary of the formation of the Royal Air Force, makes the occasion especially poignant as we remember and celebrate all those who have helped shape the service over the last 100 years.

Events like this remind us all of the huge sacrifice they make and I hope people will come along on the day to show their support.

What an honour it is for RAF Cosford to receive the Freedom of the Borough of Dudley during the RAF’s centenary year.

A Dudley man myself, I joined the RAF in 1989 and began my engineering career at Cosford. To be in a position almost 30 years later to forge even closer links between my hometown and the station where my RAF career began is a source of immense personal pride.

I know that the men and women of RAF Cosford also take great pride in the strong relationship between the station and the heart of the Black Country. We relish the opportunity to celebrate that relationship on September 16.

At 11am the parade will make its way through the town centre to the church.  Setting off from Priory Road. The parade will continue along Priory Street, Stone Street and High Street.

Residents are invited to attend the service at St Thomas and St Luke’s Church at 11.30am. This will be followed by a parade past the Council House in Priory Road, where the Mayor, Group Captain Baker from RAF Cosford and representative from RAFA will receive a salute.

The parade will end at the cenotaph in Ednam Road where a short service will take place including a period of silence and laying of wreaths.