Friends of Bumble Hole and a team of community volunteers were thanked by the RSPCA for their work in helping wildlife during a diesel spillage last year. 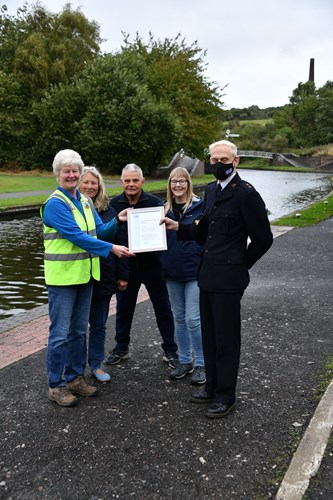 The substance, believed to be mainly red diesel with traces of cooking oil, left a red substance lying on the surface of the water at Bumble Hole Nature reserve when it came through the surface water drainage system and a culvert into the pool on 29 December 2020.

A number of small fish were found dead on the surface while wildlife including Canada geese, swans, coots, moorhens and ducks were coated with a dark substance. Many of these were rescued and treated by the RSPCA.

Around fifty to sixty people were involved in the clean-up, ranging from those on the ground pulling animals from the slick for decontamination, to local residents who dropped by with towels, blankets and refreshments.

The volunteers worked alongside the RSPCA, and other animal welfare organisations to retrieve as many animals as possible. The animal agencies took them away for decontamination and the RSPCA was able to return several Canada geese at a later date.

A dedicated core of volunteers was there for four full days in the cold December weather, with many more assisting over the week.

Brenda Myers, one of the Conservation Team volunteers said:

It was really distressing, we love wildlife and we love the reserve. To see the animals in such a state was heartbreaking, but we all pulled together to try and make a difference.

Everyone helped to make this happen, the friends, volunteers, members of the public, old and young. Whether they were there all week or just dropped by with supplies, it all helped

You have to remember that in December we were still in the height of covid and many people were anxious about coming out. Those that did, did a sterling job and this award is for them.

This was such a distressing incident at the time, and we’ve worked with Severn Trent Water and the Environment Agency on the subsequent clean-up, which cost the taxpayer more than £25,000 to clean up.

It was my happy privilege to present the Certificate of Merit to the Volunteers and the members of the Community at Bumble Hole. It was astounding and incredibly touching to see so many of you, young and old, come out day after day in the snow and ice searching for and rescuing contaminated birds.

As the hours passed it became increasingly heart-breaking work as contaminated birds would be found waterlogged, feathers frozen, and collapsed with hypothermia, or sadly having died from the cold. Such numbers of you came out to rescue the wildlife that it would be impossible to thank you all individually without missing someone out.

This Certificate of Merit is awarded to All of you, from all of us at the RSPCA, in recognition of your love and dedication for your local wildlife.

Contractors Veolia and Aqua Force worked on behalf of the council and with nature reserve volunteers to contain the diesel and begin to clear it.