Saltwells is a hidden gem

A Lonely Planet author is drawing national attention to Saltwells Nature Reserve in Dudley borough after calling it a hidden gem.

Travel writer and photographer Oliver Berry suggested the Netherton site, which is maintained by Dudley Council with the help of community volunteers. 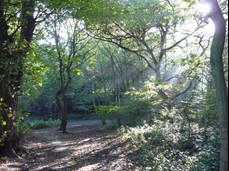 His comments follow a report from Trainline, who teamed up with the author, to uncover some of the British Isles’ best-kept secrets. It showed that train bookings to the West Midlands, namely Birmingham, has risen by 163 per cent this summer.

Saltwells Nature Reserve is famous for its bluebells in spring and is loved by young and old alike for its many sculptures. It is home to woodpeckers and wild orchids and is teeming with the most species of dragonflies in any locality in the Midlands.

Saltwells’ nationally important geology also draws in visitors from all around the world, putting it at the heart of the Black Country Geopark. It has also recently won the prestigious Gordon Miller Award as its annual exemplar of good practice from the Countryside Management Association.

We are so fortunate to have the beauty and biodiversity of Saltwells Nature Reserve here in Dudley borough and I am thrilled to see that our hard work is not going unnoticed. “I would like to thank everyone who works at the site and the many volunteers who help to keep it so beautiful and I would remind those who would like to visit that it is open throughout the year and is free of charge.”