Dudley’s popular and much-loved Saltwells Nature Reserve is set to be elevated to National Nature Reserve Status this autumn thanks to the support of Natural England.

The 250 acre site, which is locally famed for its vibrant bluebells has been recognised as a site of national importance by Natural England for its unique geology. An official announcement is expected in the autumn, with a public celebration event planned at the reserve. 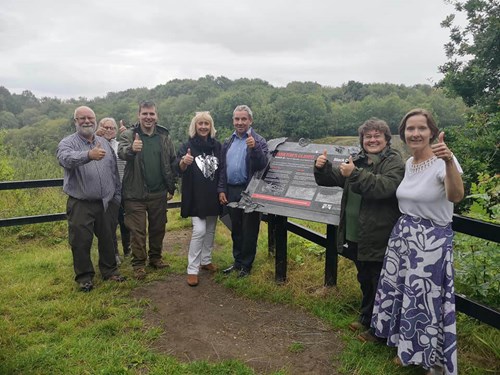 The designation of Saltwells as a NNR is of particular significance as it’s the first geological site to be selected under Natural England’s new NNR strategy launched in 2017. The National Nature Reserve Strategy has been created by a partnership of public bodies, wildlife charities and other representatives. Together they have developed a shared vision and a common purpose to take forward the founding purposes of NNRs – conservation, environmental research and places for people – putting them at the heart of 21st century conservation.

Saltwells is nationally recognised for its geology and mining heritage. The geological exposures are the best of their kind and date from 420m million years ago to 307 million years ago, when the area was covered by warm tropical seas and later equatorial swamps filled with giant insects, now long extinct.

Dudley Council’s countryside management team has a long track record of working successfully with NE and has recently been designated as an ‘approved body’ for the management of NNRs, with NE recognising their work as national best practice in terms of geo-conservation and engagement of people.

England’s 220 National Nature Reserves are the crown jewels of England`s natural heritage. The recognition of Saltwells as meeting this extremely high national standard puts it alongside such famous landscapes at the Lizard in Cornwall and Lindisfarne in Northumberland.

We’ve been working closely with Natural England for some time, and to have Saltwells recognised like this is testament to the strong working relationship we have built between our organisations.

I am so proud of what we have on our doorstep and this is testament to all the hard work of everyone involved on a daily basis. I am delighted that Saltwells is the first nature reserve to be recognised for its geology under the new Natural England NNR Strategy and I look forward to celebrating with them and our hugely supportive and active friends group in the autumn.

Natural England is delighted to award NNR status to Saltwells, in recognition of the national importance of the area and the dedication, hard work and expertise of Dudley and its residents.

Geology shapes an area and makes it distinct, and Saltwells reflects a rich diversity of accessible geological remains which helps tell the story of the nation’s rich heritage.

An ambition of the new NNR strategy is to tell England’s geological story through the network of NNRs. Saltwells is an exciting step on this journey through time.

Not only does Saltwells provide a glimpse into the past world of tropical seas and rivers, it connects this world to the history of Dudley and the Black Country.

These rocks, laid down millions of years ago, were a source of clay for the famous Royal Doulton sanitary ware as well as the coal that was so critical to the industrial revolution.

Dudley has a proven track record in caring for its geological heritage, and declaration as an NNR is testament to the team that has looked after Saltwells for so many years.

Continuously improving access to the geological exposures in disused quarry faces and canal side cuttings alongside looking after the reserve’s wildlife has made this a place valued by everyone and now celebrated as it joins the best geological places in England as a National Nature Reserve.

We’re over the moon with this news. Saltwells is a real gem, and while we’ve always been proud of it at a local level, to see it recognised nationally is just great news.

We’ll be working closely with the wardens and Natural England on the celebration event and hope to welcome more people to the reserve and our warm and welcoming friends group.

Once the status is confirmed in the autumn, Dudley borough will have two National Nature Reserves, with Wren’s Nest being declared back in 1956 as the first geological NNR in England, making Dudley the only urban borough in the country to have two NNRs. The borough already has 11 other nationally important SSSIs and five locally declared LNRs.

The reserve has a large and active friends group and runs a range of events, including bluebell walks, green woodworking and currently hosts one of the largest health walks in the borough. There are plans to build a new £450,000 warden’s base and education centre on the reserve offering additional school visits, educational activities and forest schooling opportunities.  There is also ambition to develop the council’s apprenticeship programme by providing a training facility for City and Guilds Landscape apprenticeships.

Details of the celebration event, to which the public are invited will be unveiled in September.

More on the NNR strategy

More on the work of Natural England