A shop in Dudley town centre has been shut down for three months after a trading standards investigation found it was selling illegal and counterfeit cigarettes.

Dudley Council has obtained a closure order from the courts against European Food Express, in High Street. 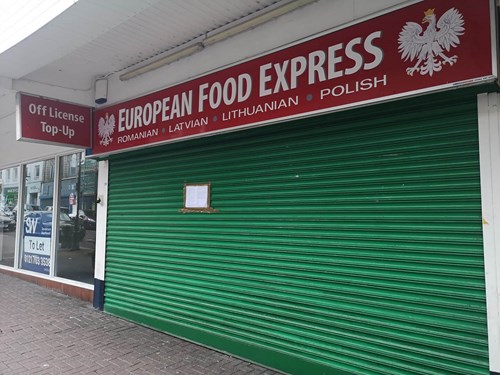 It also bans the people who were running the shop from entering it during the duration of the order.

Trading standards bosses at the council took the matter to court after discovering both counterfeit and illegal cigarettes were being sold on the premises.

The first raid on the shop was in 2016 where a haul of cigarettes was found and confiscated.

Despite warnings and prosecutions of individuals, on follow-up visits inspectors discovered illegal cigarettes and tobacco were still being sold from the premises.

The council has the option to ask the courts for a further three months to be added to the closure order before it expires.

This is the first time that anti-social behaviour powers have been used by trading standards in the central England region to close down a shop selling illegal tobacco.

The case underlines the commitment of Dudley trading standards to safeguarding fair, legitimate and lawful trading in Dudley, and the removal of rogue businesses that cause considerable nuisance in the community and damage legitimate traders.

We won’t hesitate to use these powers against other offending premises to disrupt this criminal activity.

The trade in illegal tobacco deprives legitimate businesses of revenue, robs the taxpayer of money that could be spent on schools and hospitals and frustrates attempts to help people quit smoking.

While all smoking is harmful, illegal tobacco is sold at low prices and without the necessary health warnings, which makes it easier for children and young people to get hooked on smoking.

With a thriving college and lots of young people in our town, we need to take action to protect them from the kind of harm this illegal trade has on them.”