Young people are being reminded how they can help keep themselves safe online this month.

To coincide with national child sexual exploitation (CSE) awareness day tomorrow (Wednesday March 18), the regional see me hear me campaign is highlighting how online gaming can be used by abusers to target and groom young people. 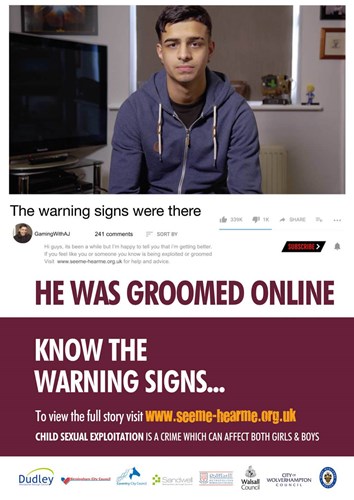 The hard hitting film ‘Gaming with AJ – the warning signs were there’, follows fictional gaming vlogger AJ, who’s targeted by an abuser.

The perpetrator grooms him online with gaming tips and free gifts to gain AJ’s trust before meeting him and then abusing him.

A powerful short trailer will target young people directly via Snapchat, Instagram and Facebook. It will also be released on digital platforms, primarily targeting gaming sites, while an audio clip will be going out on Spotify.

The full version of film is available on the campaign website www.seeme-hearme.org.uk

“Social media and gaming is now such a big part of young people’s lives and we want them to be able to enjoy this without putting themselves at any risk. Online grooming can affect both boys and girls and can happen through social media, gaming, chatrooms or other online communication.

“In this fictional story AJ was manipulated through online gaming in his own home and later abused and exploited by the man he met.

It’s vital young people understand the importance of staying safe online and parents are open with our children and talk to them about online dangers.

We all have our part to play in keeping our children and young people safe and being aware of the warning signs and acting on them early can help prevent abuse happening or escalating.

Please check out our website www.seeme-hearme.org.uk to watch the film in full. The site contains a wealth of information about CSE and the warning signs to look out for, as well as signposting people to help and support.”

People can find out more information about child sexual exploitation by visiting www.seeme-hearme.org.uk

CSE awareness day is organised by the national charity NWG Network, which is dedicated to helping combat CSE. The day aims to encourage everyone to think, spot and speak out against abuse.