Thousands came to the day-long event which featured a Christmas market along the length of the High Street, fairground rides and a land train. Lovable rogues, the Minions kept children entertained as they paraded around the town centre.

Black Country Radio played festive tunes on their stage by the Ryemarket throughout the day, while Porky entertained on the main stage.

In the Ryemarket itself, Santa was at home in his grotto, listening to the Christmas wishes of youngsters.

BBC WM presenter Caroline Martin was guest of honour and turned on the lights, ably assisted by the Minions and winner of the facebook Christmas lights competition Ashley Knott, aged five. The Mayor of Dudley, Councillor David Stanley, also attended earlier in the day. 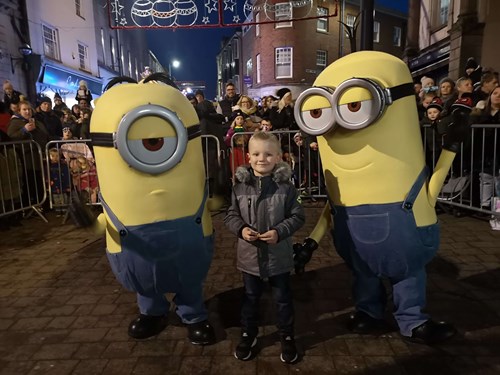 The Minions at the Stourbridge Christmas Lights switch on with competition winner Ashley Knott, aged five

This was a really enjoyable event. The Christmas market added such a festive air to the town and it was lovely to see the children’s faces whenever they saw the Minions.

We were really lucky to have such a talented range of performers who helped to make the day so special and I hope that it will encourage people to shop locally and enjoy all that Stourbridge has to offer.

There will also be community-led light switch on events in the borough during November and December.

For more information on Christmas events in Dudley people can visit www.dudley.gov.uk