The Mayor of Dudley has this week praised a local man who has researched the lives and homes of World War One heroes from the Old Quarter of Stourbridge.

Stourbridge resident, Karl Jones, has spent the last six months painstakingly researching the lives and service history of 54 men who had lived in the area and went off to fight for their country in the First Word War. 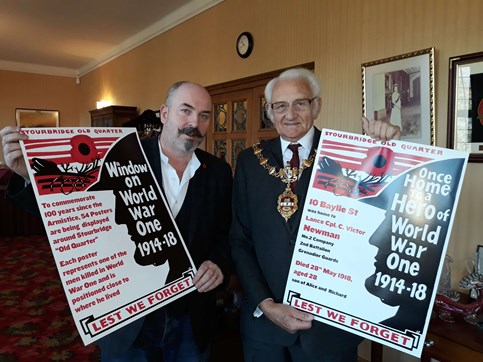 plans to bring it to the streets of Stourbridge ahead of next month's Remembrance Sunday.

An Old Quarter resident himself, Karl said how his interest in the World War One commemorations made him think about whether anyone who lost their lives in the war, could have lived in his own house.  And although he found that was not the case, Karl did discover that a young man, who had lived across the road, had been killed at the age of 19, just before Armistice.

I have a keen interest for local history and with the 100th anniversary of the end of World War One approaching, I was really interested to research the lives of local men who had lived in the houses we live in today and went off to war.

I focused my research on the Old Quarter as this is where I call home. Many of the streets are unchanged and it doesn’t take much imagination to visualise the streets as the men would have seen them.

In researching all 54 men, I was amazed at how much information was available. Suddenly, they became real people who had lived in our houses and I wanted to do all I could to honour them as part of the 100th anniversary.”

Karl has posted his research on all 54 men online at https://karlosfandango.wixsite.com/oqww1 and, in a special collaboration with Steve Field, Dudley Council’s borough artist, he intends to bring the project to life.

Ahead of the 100th anniversary, a poster will be placed in either the windows of the homes where the men lived or in a house nearby to remember their efforts in the war and to share their stories with local people.

I would like to thank all the local residents who are supporting this project and agreed to place a sign in their window in honour of our local heroes.”

I would like to commend Karl in his efforts to honour some of the local men who went off to fight in the war. Their bravery should be remembered and Karl has done a wonderful job to ensure this is the case for future generations.

People can come and pay their respects to all those who have lost their lives in war at our annual Remembrance Sunday service, which this year falls on the exact day that marks 100 years since the war came to an end.”