Stourbridge is sparkling – after thousands turned out for the official switch on of the Christmas lights in the town.

Competition winner Shiloh Mason, aged five, from Brierley Hill, pressed the button to signal the big switch-on as the huge crowd was covered in snow shot from a machine on stage. 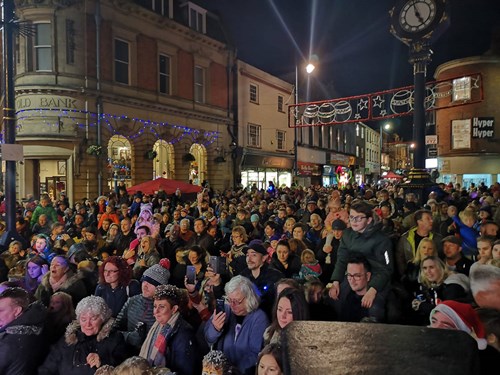 Chase and Marshall, from hit children’s TV show Paw Patrol, were also on stage dancing away to Christmas classics and they were joined by the Mayor of Dudley, Councillor Alan Taylor, and BBC WM presenter Caroline Martin.

The switch-on was the culmination of a whole day of fun-filled activities, with children’s rides, stalls and a Santa’s grotto.

There was also two stages putting on live entertainment from local acts throughout the day.

The Stourbridge Christmas event is always well supported by the local community and this was no different.

It was great to see so many people there and I’d like to thank them for coming; I’d also like to thank everyone behind the scenes who worked so hard to make it happen. It really was a great event.

On behalf of the council I’d like to wish all residents a very merry Christmas.”

Shoppers were able to park for free as charges were suspended for the day by the council on all its car parks.