The Mayor of Dudley welcomes new Bishop of Dudley

Dudley Council has held a special reception to welcome Venerable Martin Gorick, following today’s Downing Street announcement that he will serve as the new Bishop of Dudley.

The Mayor of Dudley and selected guests took the opportunity to welcome Bishop Martin to Dudley borough and to speak with him about the role, which he will officially commence in February. 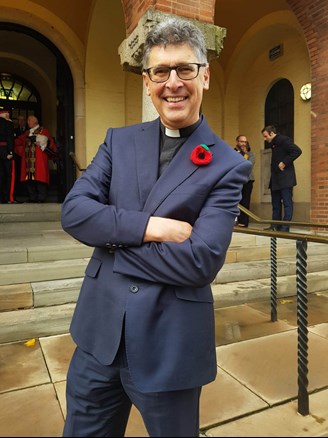 Martin is currently the Archdeacon of Oxford and Residentiary Canon at Christ Church College and Cathedral. He has responsibility for the churches and clergy in the city of Oxford, as well as being Diocesan Interfaith Adviser. He was ordained in 1987 and prior to moving to Oxford in 2013 he was Vicar of ‘Shakespeare’s Church’ in Stratford-upon-Avon, where he was also Chaplain to the Royal Shakespeare Company.

From 1994 to 2001, Martin was Vicar of Smethwick Old Church and Area Dean for the Black Country Deanery of Warley, so he knows the Black Country well. He has also worked as Bishop’s Chaplain for Richard Harries in Oxford and started his ordained life as Curate of Birtley, an industrial and mining town near Gateshead in the Diocese of Durham.

It was an honour to welcome Martin to the borough today, he is a passionate and committed man who I look forward to working with in the coming months and years.

Dudley is the home of warm welcomes and I am sure people from across the borough will join me in wishing Martin well in his new role.

I’m looking forward to joining God’s people in Dudley and the wider Diocese of Worcester as they seek to live lives of love, compassion, justice and freedom.

We’re currently living in a challenging times with many divided communities. The Church has a key role to play in offering a place of safety and sanctuary where all people can come together to share their common humanity under God.

As Bishop of Dudley, I would want to lead that work while supporting and encouraging all in our congregations to live out their faith in Jesus at home, at work and at school as well as in church.

Martin was born in Liverpool in 1962, and grew up in Nottingham. He read Theology and Religious Studies at Selwyn College, Cambridge 1981-4. He enjoys sport, especially football, supporting Liverpool and Notts County. He values walking, gardening, travelling and birdwatching. Martin is married to Katharine, who is County Lead for Visual Impairment in Oxfordshire and they have three adult children.

Martin will be consecrated as a Bishop on 28 January and will be officially welcomed into his new role in the Diocese of Worcester with events in Worcester and Dudley in February.