A charity night filled with glitz and glamour helped to raise thousands of pounds for three local charities.

Nearly £4,000 was raised during the evening for three worthy causes, chosen by the Mayor of Dudley – Headway Black Country, The Hope Centre and The White House Cancer Support. 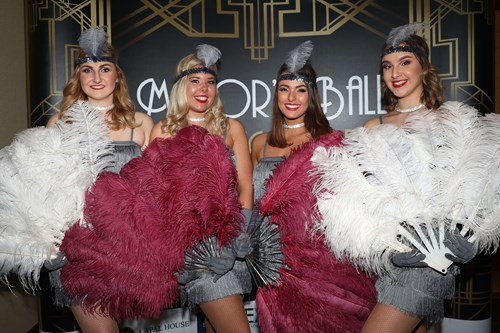 The Supreme Showgirls entertained audiences during the evening

The evening, which followed a Great Gatsby theme, included entertainment from trapeze act, Jewel Academy and dancing quartet, the Supreme Showgirls.  There was also a charity auction and raffle, games and casino tables.

A highlight of the evening was the presentation to the 2019 civic awards winners.

Thanks to all the guests who entered into the spirit of the evening and for their generosity, which helped to raise a staggering amount for three worthy charities. Every single penny raised counts and we are incredibly grateful.

I would also like to congratulate all of our civic award winners, they are truly a shining example of the silent stars in our borough who go above and beyond for the sake of others.”

Civic dignitaries, business leaders and sponsors were among the guests.